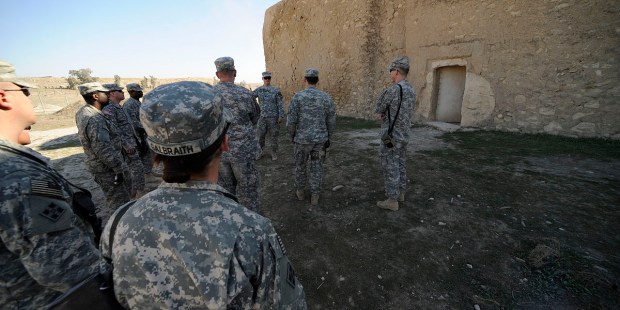 Dair Mar Elia, the oldest Christian monastery in Iraq, was named for the Assyrian Christian monk St. Elijah, who built it between 582 and 590.

Because of ISIS, it is no more.

In an exclusive, AP reports that the monastery, which is located within Forward Operating Base Marez and valued and tended to by U.S. soldiers in Iraq, was razed by by the Islamic State and reducted to “to a field of rubble, yet another victim of the Islamic State group’s relentless destruction of ancient cultural sites.”

For 1,400 years the compound survived assaults by nature and man, standing as a place of worship recently for U.S. troops. In earlier centuries, generations of monks tucked candles in the niches and prayed in the cool chapel. The Greek letters chi and rho, representing the first two letters of Christ’s name, were carved near the entrance.

Now satellite photos obtained exclusively by the Associated Press confirm the worst fears of church authorities and preservationists — St. Elijah’s Monastery of Mosul has been completely wiped out.

In his office in exile in Irbil, Iraq, the Rev. Paul Thabit Habib, 39, stared quietly at before- and after-images of the monastery that once perched on a hillside above his hometown of Mosul. Shaken, he flipped back to his own photos for comparison.

“I can’t describe my sadness,” he said in Arabic. “Our Christian history in Mosul is being barbarically leveled. We see it as an attempt to expel us from Iraq, eliminating and finishing our existence in this land.”

The fate of the monastery had been in question since the barbaric Islamic State began to systematically force out Christians from the area, erasing their history in a relentless “campaign of cleansing.” Sadly, what could not be learned on the ground has been confirmed from space.

Vatican spokesman Federico Lombardi, noting that the monastery has existed since before the Christian Church broke into Eastern and Latin Rites, said the AP’s inquiry was his first alert to the bad news. “Unfortunately, there is this systemic destruction of precious sites, not only cultural but also religious and spiritual. It is very sad and dramatic.”

Read the complete and disturbing story of this mindless destruction, and the reactions of American troops and government workers who feel the loss, here.

Related:
12 Treasures of Antiquity Destroyed in the Middle East Since 2001