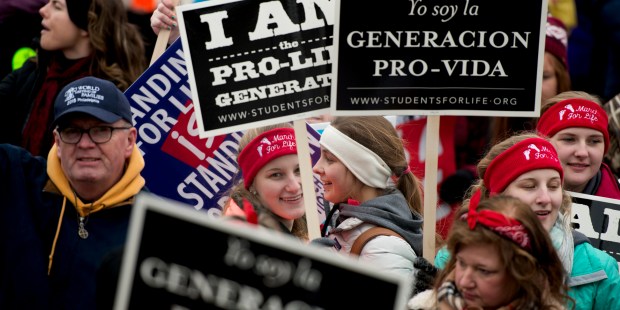 First Maryland, Virginia and the District of Columbia declared states of emergency.

Then the DC Metro announced it was shutting down by 5 p.m. today.

Then airlines began to announce their closings at Dulles airport, and veterans of DC/Maryland snowstorms like Deacon Greg Kandra began to say, maybe reconsider traveling to that March.

Then, last night, before the first snowflake fell, Bishop Paul Loverde of Arlington removed the obligation for Sunday Mass, writing,

Such inclement weather and poor road/travel conditions that may jeopardize safety are serious concerns.

I encourage all Catholics to keep the Sabbath holy. Please consider spending some time in prayer with the Lord, perhaps by meditating on the readings of the Sunday liturgy, or by making an act of spiritual communion.

As of right now, the Mall in Washington has closed.

Even with all that, though, the Marchers are out there, hale and hearty, moving forward under ominous gray skies heavy with snow:

You can watch it all, on EWTN’s livestream.

Aleteia received word that some groups whose travel plans were cancelled will be making the best of a bad situation and, rather in line with the Church’s teaching on subsidiarity, they will be acting locally, marching amid their communities. In Trenton, following a 9:30 Mass celebrated by Bishop O’Connell, parishioners from many parishes and the Knights of Columbus have coordinated and marched from the Cathedral to the Statehouse (about a 1/2 mile away). Here they are, from this morning:

Meanwhile, the young people who make up the yellow-balloon-releasing pro-life group known as the Crusaders for Life wrote to Aleteia that they were grieved to miss the March for Life for the first time since they’d formed. Robert Smith, of the Detroit chapter of CFL said, “While it is devastating to miss out on the March, we realized that we have an opportunity to pull things together for our local community, and those who cannot attend the March in DC … and take a stand in defending the dignity of every human life.”

Their Facebook page invited people to join them for a “Rosary for Life Pilgrimage”: “We are starting our Pilgrimage at Ss. Cyril & Methodius Slovak Catholic Church for 12:00 Mass! After Mass we will meet at 1 p.m. at the abortion mill at 17 & Ryan for Rosary Rally, and then we will drive to the other local abortion clinics.”

Cincinnati made alternative plans as well.

Interestingly, the Knights of Columbus have released a new Marist poll that finds that a majority of Americans, including pro-choice supporters, want restrictions on abortions:

The survey found that more than eight in 10 Americans (81 percent) would restrict abortion to — at most — the first three months of pregnancy. This includes 82 percent of women polled and nearly two-thirds (66 percent) of pro-choice supporters.

The poll also found most Americans see abortion as both ultimately harmful to women and morally wrong.

Hopeful news on a cold and gray day.

Perhaps the Best Pro-Life Argument You Have Ever Read