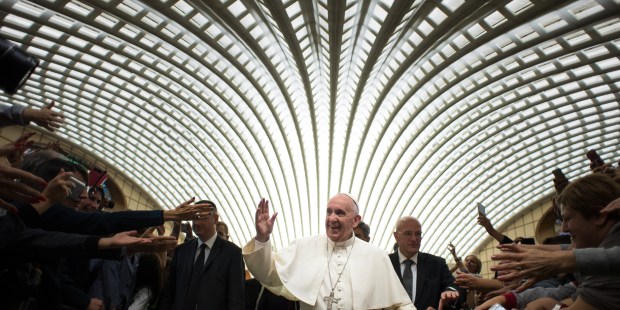 After Pope Francis’ whirlwind visit to the United States in September, it can sometimes feel like the so-called “Francis effect” has up and vanished without a trace.

But maybe the “Francis effect” is just beginning; maybe we’re so beguiled by this man that we still haven’t processed day one of his papacy.

If Netflix is any indication, we haven’t. Streaming right now are no fewer than three documentaries about Francis’ historic ascent to the balcony of Saint Peter’s Basilica: The Rise of Hope (English), The Pope from the End of the World (Spanish) and A Pope for Everyone (Spanish). These three short documentaries all revolve around a question the commentariat asks but never really answers: namely, what is Jorge Mario Bergoglio all about?

Even though they all start from this same basic question (and use a lot of the same footage and interviewees to answer it), two of the documentaries end up making broad assumptions about who Pope Francis is and why his papacy is important.

The Rise of Hope offers a well-crafted and in-depth look at Francis’ years in Argentina, including an interview with one of his sisters. But early on, it frames Francis as an agent of social justice divorced from the dictates of orthodoxy. The film slowly but surely sweeps us toward the conclusion that because of his obvious commitment to the poor, Francis is (if only secretly) committed to various other progressive flashpoints in the church as well.

The Pope from the End of the World, on the other hand, sets off almost instantly on the wrong foot, offering a hyperpolitical reading of Benedict’s resignation and Francis’ early years in Buenos Aires. The scattered clips and melodramatic soundtrack land us in a hodgepodge of hysteria around the Jesuits and prophecies of Malachy and Nostradamus, giving the impression that Francis is, at best, a cunning political strategist, and at worst, a harbinger of the end times.

This binary of reductive and paranoid thinking vis-à-vis Pope Francis is, unfortunately, all too familiar. When the pope arrived on America’s shores, two similar narratives about Francis spun around endlessly: one that overzealously reduced him to his emphasis on social justice and another that wrote it off as an incidental feature of his personality with no real bearing on Church teaching. Some looked beyond Francis, some looked askance — but actually encountering him was something else. It meant encountering a man who, like St. Francis himself, embodies the intertwining of faith and activism as much as the intertwining of faith and reason.

In this respect, A Pope for Everyone soars far above the other two documentaries and should be the go-to choice. It includes all the fascinating backstory from Buenos Aires, including an extended clip of a fiery sermon about modern slavery given by Bergoglio in the streets. (“In this city there are men who make profits with a brother’s flesh,” the pope cries out, “the flesh of all those slaves, the same flesh Jesus had assumed and because of which Jesus is here today. It’s worth less than the flesh of a pet. That’s what happens in this city!”) And throughout the four chapters of A Pope for Everyone (His Life, Humility and Poverty, Culture of Encounter, His Mission), we see Francis’ unyielding emphasis on building bridges with face-to-face dialogue, on renewing evangelization with earthy simplicity, and on flooding of the streets and the slums with the mercy of God.

But in all this, the documentary never loses sight of the fact that Francis is impelled by, and thinks with, the Church’s teachings, liturgy and sacraments. When Bergoglio “takes flesh” in the suffering of his people (as the narrator puts it), he faces earthly issues in and through a keen awareness of spiritual reality, reflecting the sacramental logic of Catholicism. This is Pope Francis: A Pope for Everyone, in a way that only a devoted son of the Church could be.