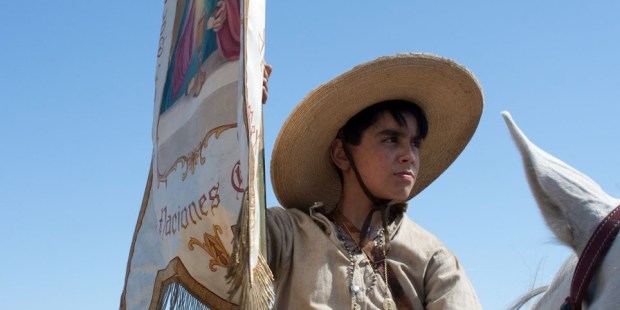 Anyone who saw the 2012 film For Greater Glory will recall the brutal, bloody martyrdom scene of a teenager in 1920s Mexico. That was a true story, and that teenager, José Luis Sánchez del Río, is on his way to being canonized.

On Thursday, Pope Francis approved several decrees presented to him from the Congregation for the Causes of Saints, including a miracle attributed to Blessed José, a young member of the Cristero movement that fought for religious freedom when Mexico’s government was severely restricting the activities of the Catholic Church.

In the film version of his story, Blessed José, played by Mauricio Kuri,  is seen as constantly repeating the Cristero cry, “Viva Cristo Rey!” or “Long Live Christ the King.” That’s the same phrase Blessed Miguel Pro and others shouted as they were killed by Mexican government officials.

Pope Benedict XVI beatified him in 2005. The Vatican website has this for Blessed José’s biography:

José Sánchez del Río was born on March 28, 1913, in Sahuayo, Michoacán, Mexico. Wanting to defend the faith and rights of Catholics, he followed in the footsteps of his two older brothers and asked his mother for permission to join the Cristeros. She objected, telling him he was too young. “Mama,” he replied, “do not let me lose the opportunity to gain heaven so easily and so soon.”

On February 5, 1928, the young boy was captured during a battle and imprisoned in the church sacristy. In order to terrorize him, soldiers made him watch the hanging of one of the other captured Cristeros. But José encouraged the man, saying, “You will be in heaven before me. Prepare a place for me. Tell Christ the King I shall be with him soon.”

In prison, he prayed the Rosary and sang songs of faith. He wrote a beautiful letter to his mother, telling her that he was resigned to do God’s will. José’s father attempted to ransom his son but was unable to raise the money in time.

On February 10, 1928, the teenager was brutally tortured and the skin of the soles of his feet was sheered off; he was then forced to walk on salt, followed by walking through the town to the cemetery. The young boy screamed in pain but would not give in.

At times the soldiers stopped him and said, “If you shout, ‘Death to Christ the King,’ we will spare your life.” But he answered: “Long live Christ the King! Long live Our Lady of Guadalupe!”

Once he arrived at the cemetery, José was asked once more if he would deny his faith. The 14-year-old shouted out: “Long live Christ the King!” and was summarily shot.

It wasn’t announced whether Pope Francis would canonize Blessed José when the pope makes his first visit to Mexico next month.