Catholics on the Bus: The March and the Long, Snowbound Journey Home 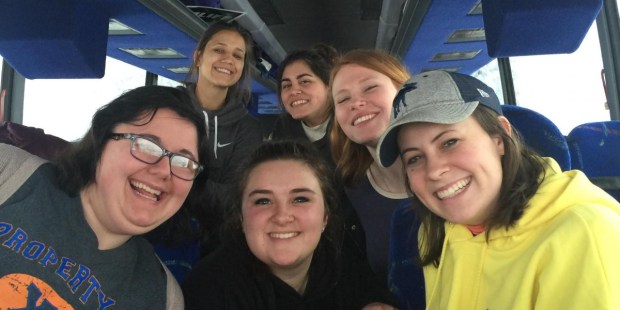 Against the backdrop of the pure white, a pause for prayer, and the witness of a new generation.

Somerset, Pa. — There was homework and reading. Singing – including the necessary Irish songs to remind you that 20 hours stuck on the Pennsylvania Turnpike isn’t as bad as it gets.

There was time. For praying. For talking. For the occasional delusional or giddy thought after a little too much time without sleep or fresh air.

There were deep thoughts — both memories of Al Franken on Saturday Night Live before his senatorial days — and discussions about the efficacy of graphic images in the pro-life movement and the need for spiritual preparation for the spiritual warfare aspects of activism and works of mercy.

There was a clogged bathroom and a run on water, and the last donut from the last time we saw anything but snow, and a line of stationery tractor-trailers and buses. And yet there was calm.

On Friday after the March for Life, I hitched a ride with the University of Mary, two buses headed back to North Dakota. Their president, Msgr. James Patrick Shea (a friend since our student days at the Catholic University of America) and I were headed to the same Denver destination and thought we’d ride the bus to Pittsburgh, planning to disembark around dinnertime on Friday.

But then it became midnight, in about the same spot we had been in until 7:20 or so. And then it became 3 AM. And then it was 8 o’clock, about when our flight was scheduled to lift off. We read on the Internet that the National Guard was on call to help us.

The students from the University of Mary and — on two other buses not far up ahead of us, North Dakota high school students, priests, staff and parents — were amazingly calm. It was an opportunity to catch up on sleep. I found it, especially around the quiet snowfall of 3 AM, the Divine Mercy hour, an especially moving time of prayer, in atonement for what’s happened in the United States all these years.

What else should we be doing?

The bus ride, sometime around 11 AM Saturday, started to seem like it would never end, yet it appeared to be a necessary pause, perhaps needed for more than just those of us on the bus. A pause for prayer, concentrated.

Forty-three years after Roe v. Wade we march, yes, even in the snow. We work to pass laws. We support pregnancy centers, and holistic women’s health care, and maternity homes, and post-abortion care. We work to provide hope and love.

Do we pray? Really pray? Pleading for healing of hearts and a nation’s soul?

The March for Life has become a tremendously inspiring thing because of all the young people, filled with joy and hope and energy, who come and march. They live in the same world we all do, but with fresh minds, and in some ways, less-complicated lives — even as it is all the more challenging, with so much competing for their attention immediately and constantly.

The witness of these students was amazing. One told me as I was finally headed for New York (via Ohio) that she felt the prayers of family and friends, and all those following our travails via media social and otherwise.

There were so many young faces praying at the Vigil for Life Mass Thursday night, so many marching, still, on Friday, despite the snow reports. The students I spent Friday night with embody virtues that will serve their calling well. We need their tender patience and zealous love for the vulnerable. We need their joy.

One other thing: My world for a little over 24 hours after the March for Life — and then in the additional 34 hours of “rescue” and waiting to get to New York — involved a number of priests. We’ve got some men today who really care about protecting and serving and embodying the love of God the Father in Word and sacrifice.

Speaking of joy: There was such renewal and resilience and hope on display in the young, in the holy men, in the volunteers and state troopers and police and National Guardsman and everyone who made stories end well during the storm this weekend.

Against the backdrop of the pure white, we have been given the witness of a new generation. May their peace and visible faith inspire. May an overabundance of love heal the wounds of the last, grave, 43 years Roe. Even while my young friends from North Dakota were at a standstill, they were still rowing us toward something better.

Related:
The Story Behind the Turnpike Mass of Snowmageddon

Kathryn Jean Lopez is senior fellow at the National Review Institute and editor-at-large of National Review Online. She is co-author of the new revised and updated edition of How to Defend the Faith without Raising Your Voice (available from Our Sunday Visitor and Amazon.com. Sign up for her weekly newsletter here.