Hospice Babies ‘R Us: Family Cares for Little Ones With Short Lives 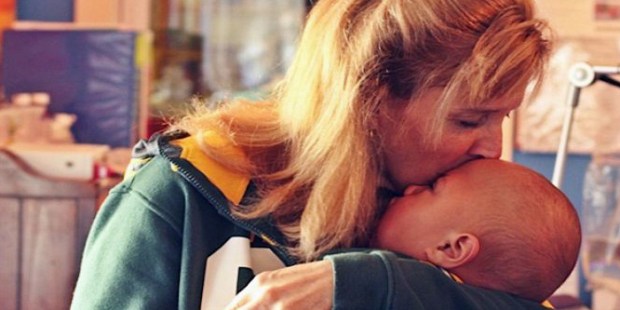 Mother Teresa of Calcutta knew she couldn’t save every one of the people dying on the streets in India. But she knew many of them were destined to die alone, so she brought them to her homes and tried to make sure they knew they were loved by someone.

Cori Salchert has a similar view of infants who have little to no hope of reaching their first birthday.

The former perinatal bereavement nurse, along with her husband, Mark, takes in babies who are born with terminal diseases and illnesses and tries to give them a dignified life, for as long as that life lasts.

Salchert already has eight children of her own, so it’s not like she feels any emptiness in her life. But a childhood experience set her on a path to provide a loving environment for any children who might come her way who are bound to have a short life.

She began adopting what she calls “hospice babies” in 2012. She told TODAY.com that the babies come from families who find it difficult to deal with the condition their child was born with. Many step away because they can’t bear to witness the end of their child’s life.

The first of the Salcherts’ hospice babies, Emmalynn, lived for 50 days before dying while cradled in Cori’s arms. Since then, the Salcherts and their children have made it their mission to care for as many babies as need it.

She told the news outlet that when her younger sister, Amie, was an infant, she contracted spinal meningitis. High fevers from the infection destroyed quite a bit of her brain function, leaving her mentally and physically handicapped, so she went to live in a children’s home for kids who were severely impaired. But when Amie was 11, she wandered out of an unlocked door and drowned in a pond.

“She was most likely alone and struggling to understand why she couldn’t breathe and there was no one there to help her,” Salchert mused. “Throughout my life, I struggled with the question, ‘Where was God when my sister needed him most?'”

That question bugged her until one day, as an adult, she heard a song that said in part, “It may be unfulfilled, it may be unrestored, but anything that’s shattered that’s laid before the Lord will not be unredeemed.”

It was this promise that changed my prayers. Instead of asking God over and over why things had been the way they were, I laid down the hurt and disillusion before God and said, “Here, you take this and redeem it.”

And he did — in ways beyond fathoming.

As a nurse, she found that she liked hospice care and working with maternity patients and newborns.

“When I started working more in the maternity field, I thought I’d left hospice behind me, until I realized there were many more than I ever realized who come to the maternity floor to have a baby and instead leave with aching and empty arms because their child died in the womb or shortly after birth,” she said. “I found myself drawn to helping these families. Where many obstetrics nurses prefer not to work with dying babies, I saw a need to make the hospital experiences of these women less traumatic — not by fixing what was broken but by handling them with care instead of rushing out of the room because their grief made me uncomfortable.”

She began an organization in her hometown of Sheboygan, Wis., Hope After Loss, to offer hope to families whose babies had died.

In spite of dealing with health issues of her own, Salchert agreed in 2012 to take in in a two-week-old baby girl who was born without the right or left hemisphere of her brain. The Salcherts “adopted” her and named her Emmalynn. The girl lived for 50 days, with all the Salcherts holding her constantly and taking her everywhere.

Cori Salchert tells the rest of the story:

There came an evening when I knew Emmalynn was beginning to fade. The whole family was home and got to hold her and kiss her. My husband tucked her close with her little head under his chin and sang to her. Eventually, most of the family began to drift off and head to bed, but my daughter, Charity, and I stayed awake with her.

I was snuggling Emmalynn into my furry, warm bathrobe, holding her on my chest and singing ‘Jesus Loves Me’ to her, when it occurred to me that I had not heard her breathe for a few minutes. I leaned her back to look at her and saw that this beautiful creature was gone. She’d left this world hearing my heartbeat. She didn’t suffer, she wasn’t in pain, and she most certainly wasn’t alone. It was painful initially. Gradually we were able to see the opportunity to hold her through this life and as she entered the next, solely as a gift.

Since then, the family has taken in a four-month-old named Charlie, who has brain damage and was not expected to live much past the age of two.

“For years I had wanted to care for babies who had a life-limiting prognosis like Charlie or a terminal diagnosis like Emmalynn,” Salchert said. “What a gift it is to be part of these babies’ lives, to have the ability to ease their suffering, to cherish and love them even though they aren’t able to give anything tangible back or even smile in return for our efforts.”

She concluded: “We invest deeply, and we ache terribly when these kids die, but our hearts are like stained-glass windows. Those windows are made of broken glass that has been forged back together, and those windows are even stronger and more beautiful for having been broken.”