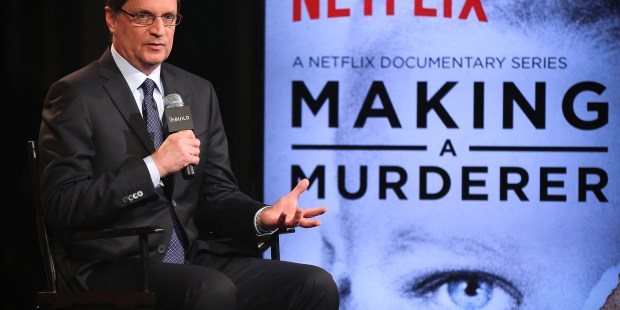 A criminal defense attorney affiliated with the Netflix documentary series Making a Murderer said he often counsels clients to “deepen their spiritual life.”

“When I have a client facing a serious criminal charge, I always encourage them to develop or deepen their spiritual life,” said Jerry Buting, whose former client Steven Avery is at the center of Making a Murderer. “They don’t always take my advice, but that’s always their choice … I’ve found that those who have a faith life can endure the challenges of a criminal prosecution for themselves or their loved one much better than those who do not.”

Buting, who has long worked as a public defender, was interviewed Mike Jordan Laskey, director of Life & Justice Ministries for the Diocese of Camden, NJ. The interview appeared in The National Catholic Reporter. Laskey renewed his acquaintance with Buting from an encounter six years ago when Laskey was leading a parish social justice program in suburban Milwaukee.

Laskey explained that Buting and a fellow attorney, Dean Strang, represented Avery, the central focus of Making a Murderer, in a 2007 murder trial. “Both lawyers’ fierce intelligence and deep compassion are displayed prominently in the documentary,” he wrote.

Buting said in the interview that there are many lessons to learn from Making a Murderer, including:

The effect of media portrayals of guilt before a trial begins, the tendency to uncritically believe whatever narrative law enforcement and the prosecution disseminate, the abandonment of the presumption of innocence, the casting aside as worthless those fellow human beings who are different than us and somehow “beneath us,” the effect of class and money and power in a criminal case, the unlimited resources of the government that can be brought to bear against the individual.

He also said that he and his wife, who has also worked as a public defender, see their  careers as more of a vocation than a job.

“Jesus reached out to the underclass of society, including the poor, mentally ill and imprisoned, and so did we,” he said. “They are humans the same as anyone but often are cast aside by the rest of society. Unfortunately, society doesn’t want to provide the financial and other resources for those who are charged with or convicted of crimes.”

Laskey said he remembers Buting and his wife, Kathy Stilling, as “very thoughtful, faith-filled” members of the parish social justice program. “I was always inspired by the way their faith influenced their work — work that, with its emphasis on justice and fairness, had in turn led them to take this deep dive into Catholic social teaching.”

“My practice also makes me keenly aware of the blessings I have in my life, and I feel obliged to help those who are not so fortunate,” Buting said. “Catholic social teaching helps keep me on the right path, as well as daily prayer for spiritual guidance.”