In Defense of Screen Time 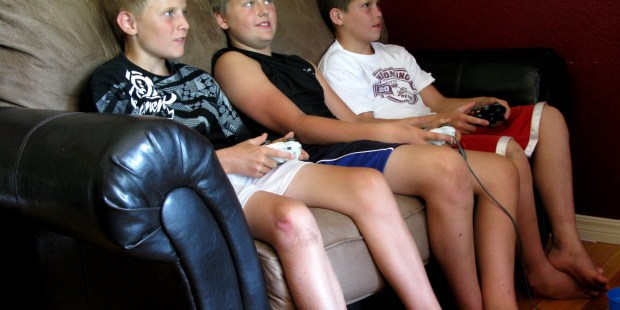 Or how I learned to stop worrying and love video games

I have a confession to make: I let my kids have as much screentime as they want.

Okay, that’s not completely true. There are a few limits. No screens allowed before school in the morning, and no screens allowed after school until all homework is finished and returned to their backpacks. On the weekends, no screens until chores like laundry are well underway, and no screens on any day until at least one half-hour (weekdays) or one hour (weekends) of reading has been accomplished.

Aside from those few limits, though, I let my kids use their computers/tablets/phones/game consoles as often as they want to, even if that means they occasionally spend ten hours on a rainy Saturday slaying robot aliens instead of doing stuff my parents’ generation would call “productive.”

During the week, that means they hardly touch their personal technology – between school, sports and clubs, the cyber world takes a backseat to the heavy demands of reality. But on the weekends, I let them have their fun – and lately, I’ve even been joining them. In fact, between dinner and bedtime each night, screentime is actually mandatory – but only on the rec room TV, around which we gather as a family to watch a show or movie of our collective choosing, and often, casually talk about the lessons we learn from it.

This is more than a “If you can’t beat ‘em, join ‘em” kind of situation. I find actual value in the time my kids spend playing video games – at least the good ones, anyway. And when I say I don’t limit their screentime, that doesn’t mean I don’t filter their content. There are clear limits on what type of content is allowable in our house (no Grand Theft Auto or Call of Duty, period, to name a few), backed up with robust filtering and monitoring software as well as good old parental supervision. But the most important thing my husband and I do when it comes to the virtual worlds in which our kids spend time is to join them there.

By playing along with or watching my kids as they play games like Bungie’s Destiny, Bioware’s Mass Effect franchise, 343 Industries’ Halo franchise, Mojang/Microsoft’s Minecraft, Respawn Entertainment’s Titanfall, and Valve Entertainment’s Half-Life 2, I have learned a lot about the way my kids approach difficult problems and make critical decisions. I have learned a lot about their personalities and the way that they inform their priorities and values. What’s more, the often ethically-complicated, high-stakes situations into which these games thrust players give me a unique opportunity to frame and discuss our Catholic values in a way that is interesting and relatable to my kids.

Take Mass Effect, for example. This classic trilogy of games (the first installment debuted in 2007; the final in 2012) thrusts the player into the role of Commander Shepard, a fully customizable character (you choose Shepard’s first name, sex and appearance) who must, over the course of the trilogy, navigate some seriously gray ethical territory on the way to saving the galaxy. It’s up to each player whether the ends justify the means, from deciding whether to sacrifice a colony of thousands of innocent people to prevent the deaths of billions more, to forming alliances with thieves and murderers in order to take out an evil that threatens the entire galaxy, to ultimately deciding for everyone in the galaxy whether free will and annihilation are preferable to a lifetime of mental slavery.   The game is a nonstop examination of that most classic of Catholic dilemmas: “May we do some minor evil so that a greater good may come of it?” As the player progresses, the game shows the consequences of his or her decisions – for better or for worse – and offers plenty of opportunity for tuned-in parents to talk to their tweens and teens about the morality and outcomes of those choices.

Not every game is going to offer that kind of opportunity for in-depth discussion, of course. Candy Crush and Angry Birds really are just time-wasters, and I defy anyone to point out even one redeeming value in the infamous Grand Theft Auto franchise, other than as an example of how not to live. But I have had interesting discussions about fascism and piracy while watching my kids play Titanfall; my eldest son and I have debated at length about the morality of Halo’s all-powerful military government, the UNSC and its black-ops group ONI; and by gaming with my kids, I’ve learned a ton about how both my boys cope when faced with tough calls to make in limited time frames. I’ve also learned a lot about how they approach challenges in general – one brave and fearless to the point of near-stupidity; the other one cautious, a thinker … perhaps even an overthinker, paralyzed with indecision at times even as his brother goes charging without a second thought into a hail of weaponized plasma fire.

But the most important thing I’ve gained from embracing screen time for my kids is not opportunities for moralizing or performing acts of armchair psychoanalysis on them. The most important thing I’ve gained is simply time – time spent snuggled together under blankets on the sofa, long after the age when many tween- and teenage boys would have pushed their mothers away; time spent sharing in their triumphs and losses, which, while virtual, can sometimes feel very real to them; and best of all, time spent making memories together: playing, talking, laughing and learning – all good things, regardless of where you find them.