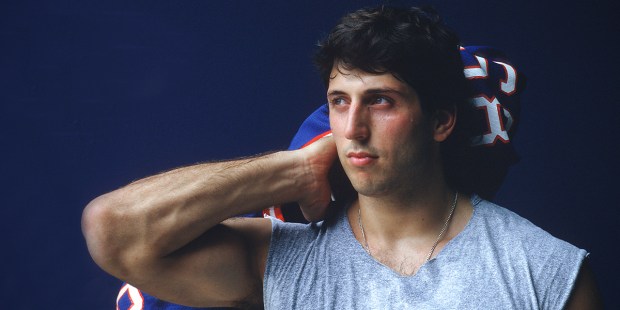 Photo by Focus on Sport/Getty Images
EAST RUTHERFORD, NJ - CIRCA 1987: Mark Bavaro #89 of the New York Giants poses for this portrait circa 1987 at The Meadowlands in East Rutherford, New Jersey. Bavaro played for the Giants from 1985-90. (Photo by Focus on Sport/Getty Images) *** Local Caption *** Mark Bavaro
Share
Print
David Mills - published on 02/03/16

For the Super Bowl hero and All American, it wasn’t about the clothes

The best tight end in the NFL stood in the back at the 6 a.m. weekday Mass during Lent. “He would have on tattered jeans, a Celtics tank top. He had that long wild hair, three or four days growth,” a friend recalls, talking about the New York Giants’ Mark Bavaro, who was a noticeable 6’4” and 245 pounds. “This friend of mine’s mother would go to the Mass, and she would come home and tell her son, ‘There’s a gentleman who comes every day and we all got together to say a prayer that he would find a job.’”

Bavaro had been an All American at Notre Dame and was known for kneeling in the end zone and making the sign of the cross after scoring a touchdown. He had been arrested at a pro-life rally while playing for the Giants and served as vice president of Athletes for Life. He was also one of the six Giants from the 1986 Super Bowl-winning team to appear in a pro-life video produced by the team’s owner, Wellington Mara, a member of the board of the American Life League. (Something you won’t find with, oh, the Dallas Cowboys.) He spoke (he appears at 1:48) of “abortion death squads” and using the sign of the cross “as a prayer for the condemned unborn.”

Apparently a really good guy and someone unafraid to speak for life when people in his position rarely do. It must kill endorsements, even if you are an All-Pro. It’s money out the window. Four cheers for Mark Bavaro.

But then there’s those tattered jeans and tank top at Mass. It was 6 a.m. on a weekday in Lent, okay, but still, it’s the Mass.

Your Lord and Savior appears. The creator of the universe, right there on the altar and a few feet back in the Tabernacle. It’s a big affair, the social event of the year, even if it’s celebrated every day by the sloppiest priest in the tattiest, ugliest building. It should be announced the way movie openings are announced in old movies, with the search lights and the huge flashing neon signs. It’s like meeting the All Pro of All Pros. You get out your tuxedo.

I am not myself fond of very early mornings but if I found myself having to get to Mass at 6, I’d manage business casual. Not tattered jeans and a tank top. But then I’d dress that way to go to the coffee shop or the grocery store. I dress like that to sit at my computer at home, where no one sees me but my wife and youngest children and the dog.

Presumably this was not an issue for the apostles as they travelled with Jesus, each having only one outfit that was pretty much like everyone else’s. But you can imagine that were they travelling around today, everyone would have suitcases and changes of clothes.

I’d like to think of Jesus saying, “At least business casual, guys,” and having the preppy apostle take the blue-jeaned apostle to the store for new clothes. It’s the way people in my world dress. It’s all-purpose proper and respectable. But I don’t think Jesus would. He meant what he said in the words of I Samuel about the world looking on the outside but God looking at the heart. The one who dressed like the Italian model might have been Judas and the one in blue jeans St. John.

We think, or at least people like me think, of clothes as a symbol with a hierarchy of formality corresponding to the importance of the occasion. Mass means nice clothes. Different people have different hierarchies. Not everyone has the bourgeois view of clothing. Some see clothing differently and may not see it as symbolic at all. Their minds aren’t wired that way. They might feel about their tattered jeans the way I feel about my chinos.

Bavaro’s friend (his teammate Phil McConkey, who also appeared in the video) explained, “He could care less about his appearance.” So Mark Bavaro came to Jesus dressed like a guy who needed a job. That same attitude also led him to a pro-life rally on the upper east side of Manhattan and into a jail cell. It led him to make the sign of the cross on the football field. It led him to speak for the unborn. It led him to a witness that surely cost him fame and money.

Someone might come to Mass in tattered jeans and tank top because he’s coming to meet Jesus and it never occurs to him that Jesus is going to care how he’s dressed. And he actually really doesn’t. He’s got his eye on your heart, not your shirt. Here comes everybody, and not everybody dresses up, and that’s okay.