The Mercy Journal: From Alienated to Bathing in Christ’s Love in One Second 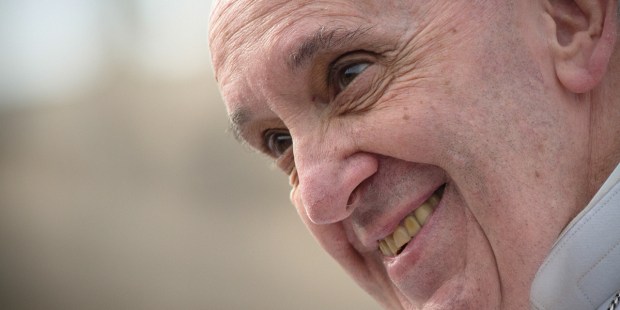 Pope Francis’ “mercifying” mission is for all of humanity’s wounded

With our eyes fixed on Jesus and his merciful gaze, we experience the love of the Most Holy Trinity.

This pope won’t stop talking about mercy. He’s even come up with a word I’ve never heard before: mercifying. “What in the world does that mean?” I asked when I saw the word in his new book. For while his namesake, St. Francis, was charged by God to “rebuild my Church,” it seems Pope Francis has been given the mandate of “mercifying” the Church.

In Pope Francis’ first book, The Name of God Is Mercy, he talks at length about mercy with veteran Vatican reporter Andrea Tornielli. Francis clarifies the meaning of the Latin expression he chose for his episcopal motto, miserando atque eligendo, which he explains as meaning “mercifying and choosing.” (Translated elsewhere as “mercying and choosing.”)

According to the pope, mercifying describes the gaze of Jesus, who looks upon us with love, forgives our sins and chooses us. Mercifying happens when we experience ourselves as being seen by Christ, when we sense his penetrating eyes unveiling ours, and when we come to know that we are loved, embraced and chosen, calling us forth to repentance and new life.

Francis’ description of his own experience of being mercified in the confessional at age 17 prompted me to remember my own encounter with God’s transforming mercy at the age of 23, when my soul morphed from the black alienation of separation from God to being bathed in the light of Christ’s love in one split second.

Agnostic at the time in spite of being raised Catholic, I was carrying on like a complete pagan, indulging myself in anything and everything the world had to offer. After several years of vacuous living, I became aware of my own inner emptiness and began to cry out for God to show me if he was real. That small opening — to which Francis refers as conceding to God “the smallest glimmer of space” — was enough for God to move. In short order, God sent someone to my apartment unexpectedly who invited me to go to church with him that Sunday — the unforgettable day that I was mercified by encountering Jesus Christ.

“The medicine is there, the healing is there,” says the pope, “if we only take a small step toward God … or even desire to take that step” (Pope Francis, The Name of God is Mercy, xviii).

What stands out in my mind as I think back on that life-changing experience is how miraculously, in one instant, I suddenly became utterly convinced that Jesus knew me personally, that he loved me and that he wanted to be in a relationship with me. Like the tax collector, Matthew, to whose calling Pope Francis repeatedly refers (Matt. 9:9), “I knew that I was seen, loved, chosen.”

My angst over my own hollow life — which I was not even able to call “sinful” yet — had led me to the point of questioning. But it was the infinite gaze of Christ’s love that turned me on a dime, that changed my mind about what could make me truly happy, that called me to leave a lost, lonely life behind to follow him. As grace moved, I quickly saw my own wretchedness and the need to amend my life. Necessary repentance came, but it was the look of merciful love that first called me forth from sin’s stupor.

This is the dynamic of encounter that Pope Francis refers to as mercifying, wherein we experience Christ seeing our inmost hearts and are touched by his desire to respond to our deepest need for forgiveness, healing and restoration. The world is flat, desperate for mercifying at such a time as this — the very reason Pope Francis speaks incessantly about it.

I believe it is a time for mercy. The Church is showing her maternal side, her motherly face, to a humanity that is wounded. She does not wait for the wounded to knock on her doors, she looks for them on the streets, she gathers them in, she embraces them, she takes care of them, she makes them feel loved. And so, as I said, and I am ever more convinced of it, this is a kairos, our era is a kairos of mercy, an opportune time.

—Pope Francis, The Name of God Is Mercy, 6