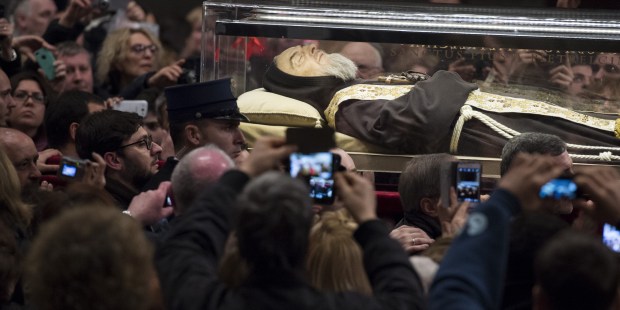 VATICAN CITY — The relics of St. Padre Pio of Pietrelcina (1887–1968) and Croatian saint Leopold Mandic (1866–1942) were carried in procession into St. Peter’s Basilica on Friday, as part of Pope Francis’ intention to promote sacramental confession during the Year of Mercy.

In a moving procession that made its way down Rome’s Via della Concilizione to the Vatican Basilica, the coffin-shaped glass reliquaries holding the relics of the two saintly Capuchin priests known for their extraordinary gifts in the confessional — including the reading of hearts — were brought into St. Peter’s Square, where clerics, religious and thousands of lay faithful welcomed their arrival. Click here to see Aleteia’s photos of the procession.

Archpriest of St. Peter’s Basilica, Cardinal Angelo Comastri, led the faithful in prayer. In an eloquent address following a reading from the Gospel, he extolled the priestly holiness of the brother Capuchin confessors, and welcomed them to St. Peter’s. The reliquaries were then incensed and taken in procession into St. Peter’s amid the chanting of the Litany of the Saints.

Fr. Joseph Carola, SJ, professor of patristics at the Pontifical Gregorian University, and author of Conformed to Christ Crucified, Meditations on Priestly Life and Ministry (volumes 1 and 2), spoke with Aleteia on Friday about the mystery of the Catholic priesthood shining forth in these two Capuchin saints and the significance of their visit to St. Peter’s, particularly during this Holy Year.

“The priestly ministry of the two Capuchin saints, Padre Pio and Padre Leopoldo, in the confessional and at the altar, powerfully revealed their sacramental conformity to the Risen Lord Jesus crucified,” Fr. Carola said. “Through them, Christ himself forgave sins and reconciled contrite penitents with our heavenly Father.”

He continued: “The faithful ever in need of Christ’s mercy flocked to them because they met in them Christ Jesus, the merciful High Priest. What is, in fact, true of every priest was manifested most powerfully in them because of the grace-inspired integrity of their lives. Having died so thoroughly to themselves, they shined brightly with the light of Christ, which dispelled the darkness of sin threatening to engulf the lives of so many others.

“These two saintly priests were truly Fathers in whom the faithful experienced the love of our heavenly Father. Such love alone satisfies the deepest longings of our heart. No wonder that the faithful flocked to their confessionals and continue to implore their intercession,” Fr. Carola said.

Following the procession into St. Peter’s on Friday evening, the faithful and pilgrims who were present in St. Peter’s Square were invited into the Basilica, where Cardinal Comastri and Archbishop Rino Fisichella led them in the recitation of the Joyful Mysteries of the Rosary, the Litany of the Blessed Virgin Mary and prayers for the Holy Father.

The relics of the two Capuchin saints will remain before the main altar, located just above the bones of St. Peter, in  St. Peter’s Basilica until February 11.