The Bishop Who Wants to Bring Great Books to the Midwest 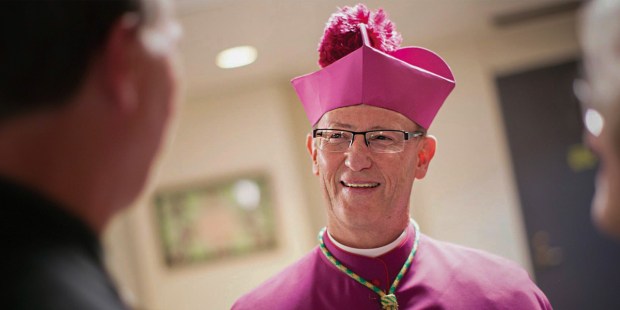 In a recent essay, Bishop James D. Conley of Lincoln, Neb., shared with readers how great literature has had a profound impact on his life. Now, he is striving to bring the gifts of Western civilization and Catholic culture to as many others as possible.

Aleteia spoke with Bishop Conley about his vision and his plans for the Newman Institute for Catholic Thought and Culture in Lincoln.

Could you talk about the role that great literature has played in your life, particularly in your formation as a person and in your spiritual formation?

I grew up in the Presbyterian Church and went to public schools my whole life. I didn’t have a very good education at all. It was during the early 1970s, and there was a lot of experimentation in education, a lot of educational models that were being tried …

But providence stepped in, and I went off to the University of Kansas, and I learned about a program that was being offered there called the Integrated Humanities program. … There was no religious motivation at all for me to get involved in the program; it just sounded interesting.

The program was started by two English professors and one classics professor. They were seasoned, tenured professors, and they were very good teachers. They had discovered that students really had not been exposed to the great things of Western culture — literature, poetry, music — things that were part of the staple of education a generation or two before. They were frustrated as university professors that you couldn’t presume that students had [studied] the fundamentals.

So they chose as the moto “Let Them Be Born in Wonder,” the Latin phrase, nascantur in admiratione — the idea being that these students had never been exposed to wonder, so as teachers, let’s introduce them to these beautiful things that had always perennially been taught through the ages. It was a freshmen/sophomore program.

We read the great Greek classics, beginning with The Odyssey, all the way through to the Romans, in the second semester. We read The Aeneid, among others. And in the third semester we read early Christian authors, passages from the Bible, The Confessions of St. Augustine, The Consolation of Philosophy by Boethius. The last semester we began with The Canterbury Tales and continued with the early Moderns and ended with the modern day.

What happened was, students, as in my own case, fell in love with this beautiful literature, the characters, everything else surrounding it, because not only was this a literary program, we had a lot of extracurricular things: we’d go stargazing, learn about the constellations and how they worked into the literature we were reading, especially the pagan authors. And we would have, every year, a spring waltz, where the students would come together and organize a beautiful experience of waltzing. We’d hire the university orchestra, reserve the university ballroom and have waltz lessons, since nobody knew how to waltz. It taught us manners. It taught us how to treat women as ladies, and men became gentlemen in the process. It was a poetic exposure to beautiful music, beautiful dancing.

We also memorized poetry, because the professors realized that none of us had really memorized anything. In the history of education … repetition is the mother of learning. We’d learn reams and reams of poetry, so our imaginations would be filled with this great verse from the best of English poetry.

In what practical ways has this helped you throughout life?

All these things combined into a rebirth of wonder. I had never known these things had existed. It opened up a whole new world to me. From being kind of a mediocre, boring student — this program was not geared toward honor students, by any means; we were all pretty much run-of-the-mill students — what it did was, we fell in love with learning and we became excited about learning because of these beautiful things. Beauty attracted us to these great ideas, like truth, goodness and beauty as they are lived out in books, but also as we sort of lived them out in our lives — the beautiful experience of a waltz or going out in the night looking at the stars, seeing God’s beautiful creation.

So it was not just an intellectual program. Sometimes I tell people I read my way into the Catholic Church. Well, that was part of it, but it was the experience of friendship and love and all these things combined to really open my heart to a world I didn’t even know existed.

Are people in general reading enough these days?

I think there is a real poverty of good reading material; in other words, the classics, the staples that were the pillars of education, are not being read. Anyone in the field will tell you that — those who are teaching English literature or Classics at the university level — that fewer and fewer are majoring in that.

What can be done to encourage more people to read literature that can have a life-changing impact on them?

I think it has to begin earlier than college. I believe the growth in the home-school movement is an indication that people are dissatisfied with the public school system and want to give their children more and introduce their children to this rich treasury of good literature and music and poetry and art and all these things. … If you look at the curricula of the home-schooling programs, they all are rich with these classics. Also I think charter schools are an indication that there’s a desire for this. And Catholic schools. That’s what we’re trying to do in Lincoln, and I know a lot of other bishops are looking at their own Catholic schools and trying to improve them with the tradition that we’ve been given, and that is this great liberal arts, great books tradition …

Tell me about the Newman Institute you’ve started with the Newman Center at the University of Nebraska-Lincoln. Is that kind of an answer to the need for better reading?

It is. It’s an institute for Catholic thought and culture. It’s something that has come from my own experience at a big public land grant university. The University of Nebraska is similar. … There are others that are doing this, and quite successfully. Catholic studies institutes are springing up at different universities across the country. And all of them have the same goal — that is to expose students to the great ideas, great books, great treasures of our Western culture and Catholic tradition, on a secular campus …

So we want to offer an opportunity for undergraduates to take these courses [in the great books], accredited by our seminary, St. Gregory the Great, which is an accredited degree-granting institute of higher learning in the State of Nebraska. … More than just the courses, it’s an institute of thought and culture, so we want to have a lot of extracurricular activities to build friendships, relationships, perhaps to take pilgrimages, to visit places both within the state and country but also abroad, to expand it to involve all kinds of outside activities that would help form the culture and form the whole person. That’s what we’re after, forming the whole person — body, mind and soul.