The Doritos Commercial and the Revival of Voluntarism 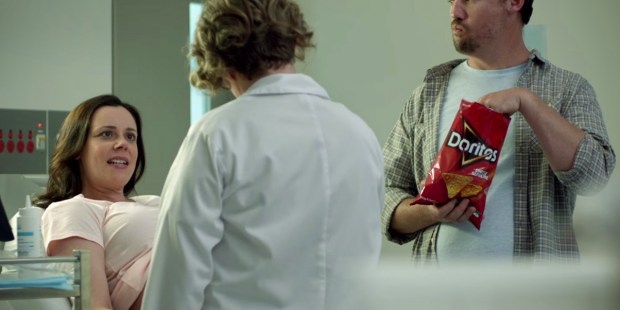 As Pope Benedict XVI saw, the divorce between will and mind unleashes violence, indeed

I’m sure by now you’ve heard about the absurd reaction of the National Abortion Rights Action League (NARAL) to the lighthearted Super Bowl commercial produced to advertise Doritos. In the thirty-second clip, a pregnant mother, undergoing an ultrasound, is annoyed by her husband who is absentmindedly munching Doritos while their baby’s image is displayed on the screen. But as the father moves the chip, the baby in the womb moves with it; and when the mother throws the chip across the room, the child reacts so keenly and purposively that he decides this is the moment to be born.

Cute, funny and harmless, right? Oh, not according to NARAL, who complained (and one is compelled here to stifle laughter) that the commercial dangerously “humanized” the fetus. We are tempted to ask, “What do you think was gestating in the womb? A monkey? A rabbit?”

It has, of course, long been established scientifically that even a conceptus (a fertilized ovum) is already in full possession of human DNA distinct from that of his parents. Moreover, the developing embryo has a heartbeat and her own circulatory system 22 days after conception; at 20 weeks, the baby in the womb is capable of hearing his mother’s voice, and responding to light, music, and other external stimuli. So though the Doritos commercial is, of course, playful, it exaggerates something quite real.

Yet according to NARAL, the child in the womb should not be “humanized,” lest the absolute right to murder that child at any stage of its prenatal development should be denied. And mind you, that right, in our country, extends even to the moment when the baby is emerging from the womb (partial birth abortion), indeed to the time after his birth, since many states place no restrictions on the killing of a newborn who has miraculously survived the abortion procedure (cf. born alive legislation). For many people, the bottom line is this: all objective evidence to the contrary, the unborn are not human because defenders of abortion don’t want them to be.

And here, philosophically speaking, is the rub. There is an ancient and enduring philosophical position that goes by the name of voluntarism, which is to say the systematic favoring of the will over the intellect. In the Middle Ages, this view is on display in certain theologians, who insisted God’s will is his primary attribute and therefore that the divine choice trumps all, including the evident truths of reason. William of Occam, for example, famously distinguished between God’s potentia absoluta (absolute power) and his potentia ordinata (ordained power). The former is what God, in the pure sense of the term, could do, his totally rangy capacity; while the latter designates what God actually did. So for example, God in fact commanded us not to commit adultery and in fact made a world in which circles cannot be squares and vice versa.

But in his absolute power, presumably, he could have determined that adultery is a virtue and that square circles are possible. This late-medieval theorizing was picked up on by the founder of modern philosophy, René Descartes, who speculated that 2+2 in point of fact is equal to 4 but that God could determine, should he please, that it be equal to 5.

A philosopher who had no sympathy for this nonsense was St. Thomas Aquinas, who held that God’s freedom is grounded in the truth of his being. God can indeed do anything, but he can’t do the impossible, precisely because the impossible is a modality of non-being. To say that God cannot make 2+2 equal to 5 or turn adultery into a virtue is not to limit God; it is to say that whatever he wills is consistent with the integrity of his own being. In a word, Aquinas insisted that the will and the intellect are partners and that freedom, accordingly, ought always to be consistent with the truth of things.

In 2006, Pope Benedict XVI, who as an academic was very familiar with the controversy I have just rehearsed, gave an oration at the University of Regensburg that came down on the side of Thomas Aquinas. The central theme of his presentation was the essential role that reason ought to play in relation to religion. At the heart of his argument was the concern that voluntarism was asserting itself in the religious realm (God’s absolute power) and that this was conducing to violence, since without a common consensus regarding the truth, all that rival groups can do is resort to force, the assertion of the will.

I hope it is becoming clear why I feel this somewhat arcane academic discussion is of crucial relevance in our time. As silly as it is to say that 2+2 could be equal to 5, it is just as silly to say that a child in the womb is anything but human. What makes both assertions possible is the claim that will (whether God’s or our own) supposedly trumps intellect, that the sheer desire that something be true can make it true. And what makes all of this more than merely silly is, as Pope Benedict saw, that the divorce between will and mind unleashes violence, indeed potentia absoluta.

The revival of voluntarism is on rather massive display in our society and the principle of the primacy of the will is behind much of our discussion of moral issues. As has always been the case, this has led to a distortion of speech and to the unchaining of some pretty dark forces.

Bishop Robert Barron is an auxiliary bishop of the Archdiocese of Los Angeles and the founder of Word on Fire Catholic Ministries.