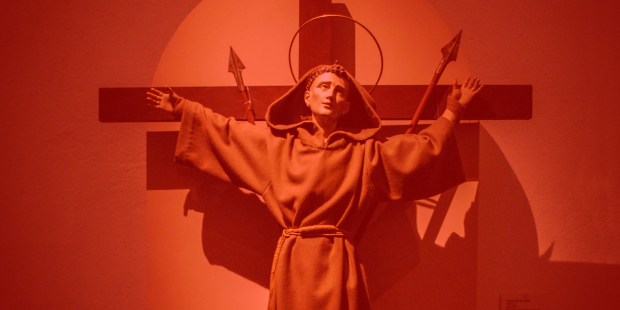 Felipe de Jesus never made made it back to Mexico, becoming the first to die for the faith in Japan

San Felipe de Jesus may be the patron of Mexico City and one of the 26 Martyrs of Japan, but he reportedly began life as a frivolous boy and was later a reluctant priest.

Born in 1572 in Mexico City, Felipe joined a new Franciscan order called the Reformed Franciscans of the Province of St. Didacus, founded by St. Peter Baptista. Not long afterward, however, Felipe became disinterested in religious life and in 1589 left the community. He became a merchant and took to the high seas, landing in the Philippines.  A year after he arrived, though, he was drawn to the Franciscans again and reentered the order in Manila.

There was no ordinary in the Philippines at the time, so when Felipe was ready to receive holy orders, his superiors ordered him back to Mexico. Bound for his homeland on a Spanish war vessel, with four other friars aboard — another Franciscan, a Dominican and two Augustinians — the ship was blown off course in a terrible storm and they landed in Japanese waters, stranded on the island of Tosa.

Officials seized the boat and soon became suspicious of the Catholic missionaries since the ship was carrying ammunition. The captain made the mistake of praising the king of Spain and said the missionaries were preparing the way for a Spanish conquest. Infuriated, the Japanese emperor ordered Felipe and his missionary companions arrested, along with the founder of Felipe’s order, Peter Baptist, who had already been working in Japan for a few years. Seventeen Japanese Franciscan tertiaries, as well as Jesuit Paul Miki, and his two servants, were also seized.

On January 3, 1597, Felipe and his missionary companions were marched through the streets of Kyoto, all of them with their ears sliced off. Two and a half weeks later, they were taken to Osaka and then on to Nagasaki where they were brought to a hilltop, now called the “Mount of Martyrs,” and crucified. Each was made to stand on a cross beam, then their arms were tied to another beam and they were held to an upright pole with an iron collar. The practice was then to spear the person through both sides of his chest, after which death came quickly.

Fr. Jose Aguilar, a Mexican Jesuit living at the Jesuit residence near the 26 Martyrs Museum in Nagasaki told The Catholic Sun in 2013 that the beam Filipe was standing on broke, so the Franciscan was choking from the collar. The order for his execution was given immediately and with that, he became the first of the 26 Christian martyrs in Japan, as well as the first Mexican martyr.

Pope Pius IX declared Felipe a saint on June 8, 1862, and he was named the patron saint of Mexico City. During the three-year Cristero War, which began in 1926, many turned to Felipe’s intercession. Devotion to him was so fervent in Mexico that when it was time to build the 26 Martyrs Museum and Shrine in Japan, many tradesmen and artisans from Mexican came to help. At the shrine’s dedication in 1962, more than 600 Mexicans were in attendance.

Though the seeds of the more than 250,000 Japanese martyrs have yet to bear the fruit of widespread faith in Japan, the little church near the 26 Martyrs Museum, named for San Felipe, stands as a moving reminder of the heroic virtue of Mexico City’s patron saint.