Eating Through Mexico With Pope Francis 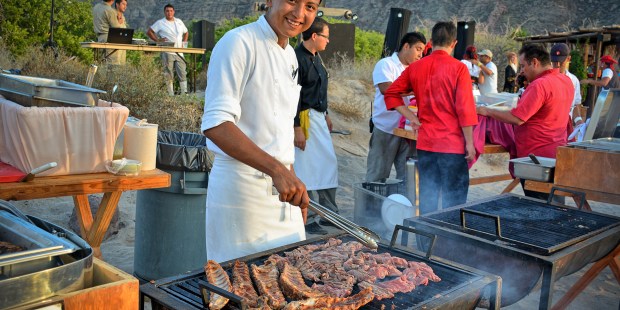 Pope Francis is back in the Americas this weekend, for a seven-day trip to Mexico, where he’s expected to speak about issues like immigration and poverty. But Mexico, like any other nation, is much more than its struggles, and among its greatest assets is its vibrant and diverse cuisine. Francis may get to experience some of that firsthand as his travels take him to four major regions of the country. If we were able to add a culinary tour to the pontiff’s agenda, here’s what Francis might find himself enjoying with the locals …

Corn, beans, chilies, avocados, squash, tomatoes and tomatillos are among Mexico’s culinary treasures, and every region uses them in unique ways. Since the majority of Mexico’s population lives in Mexico City,  you can find every kind of dish here. And the nearby metropolis of Ecatepec, also large and rich in culture, is much the same.

Since the pope will be using Mexico City as a home base for the trip, he’ll have plenty of time to enjoy a plate of tacos al pastor. He’ll find that almost every corner taco joint in Mexico City has a side of pork spit roasting in plain view. These delicious tacos are made from slivers of the savory, marinated meat, shaved off as you place your order. Served with chopped cilantro, onions, pineapple and a squeeze of lime, they’re perhaps Mexico’s most popular taco, and with good reason.

Francis might feel right at home if he’s served tlacoyos, since they have a distant resemblance to the empanadas of Argentina. Tlacoyos are often made from a blue corn dough that is rolled out, filled with fresh cheese or beans and then closed up and fried.

If he’s really hungry, there’s huaraches, which literally means “sandal”; large and very thick, fried tortillas about the size of an adult shoe (hence the name), they are topped first with beans and cheese and then strips of steak and salsa.

For something tamer, sopes might be the way to go. The tortilla dough is made the size of a baseball and topped with beans, sour cream, onion, chicken, lettuce, salsa and cheese.

But people everywhere would no doubt pay a pretty penny to see the pope eating esquites — skewered and roasted corn on the cob, slathered with butter, mayonnaise, chili sauce and cheese and sold from little street carts all over the city. They’re messy and delicious, and it would take some skill not to get any on those white cassocks.

The southeast state of Chiapas borders Central America and its capital is Tuxtla Gutierrez, the only city in the state and a hub for visitors traveling to and from the Chiapas region. Like the rest of Mexico, the cuisine here reflects the region and its traditions. It all begins with corn, which goes back to the ancient Mayan culture of the area.

Pope Francis is known as a guy who takes risks so street food might be the way to go when he’s in Tuxtla Gutierrez on Monday. He could start with platanos fritos rellenos de queso y crema —fried plantains filled with cheese and cream. (At least he’ll have no problem pronouncing it!)

If the pope wants to get really daring, he can reach for the local caviar dish called nucú, a Chiapas specialty (and apparently delicious) of oversized queen ants filled with thousands of eggs, which are roasted, salted and served with chili and lime juice. Often they’re put in tacos for an extra crunch. A local sugar cane-based liquor called posh might be the way to wash them down.

Then there’s the much tamer elote, which is pretty much the same as esquites back in Mexico City. And Chiapas has its own tamales, as does every region, as well as numerous meat dishes, including la chispota (beef with cabbage and chickpeas), chanfaina (lamb innards with rice), niguijuti (pork served with mole sauce) and cochito (pork in adobo sauce).

For a drink, Francis should reach for something chocolatey here. Cacao was first discovered in the Chiapas region (and Guatemala) more than 4,000 years ago. And the pope can feel really good about drinking lots of coffee in Chiapas as it’s reportedly all organic and shade-grown.

UNESCO has designated Mexican cuisine as a cultural treasure, and the food of the Michoacán region is largely the reason. Located in the western part of the country, bordering the Pacific Ocean, the name means “place of the fisherman” because of its stretch of coastline. Morelia is the capital of Michoacán and is serious about its food, which is heavily influenced by the local native Purépecha people.

Pope Francis could start with uchepos, tamales made from fresh corn and cooked in fresh corn husks, giving them a sweet taste and smooth texture. They’re topped with a thick sauce, cream and a little salsa.

He might also begin with sopa tarasca, a smokey, spicy soup made with white beans, tomatoes, onions, garlic, dried ancho chilis, with a little queso fresco and pieces of fried corn tortillas tossed into the bowl right before eating.

Another popular dish in this region is enchiladas michoacanas, made with steamed vegetables inside like potatoes, carrots, squash, etc., instead of meat. The tortillas for these are made with chili huajillo, which makes them red and gives them a zing. On the top goes shredded lettuce, sour cream and cheese, and they’re often eaten with chicken, either as a side or shredded on top.

If the pontiff didn’t give up sweets for Lent, he could dig into one of Morelia’s desserts — gazpacho. It’s not what you’re thinking. This one is like a huge fruit cup, made of small pieces of pineapple, mango, jicama and other seasonal fruits, topped with crumbled cheese, orange juice and a bit of chile.

And what’s a meal without something to sip on? Charanda is a popular sweet alcoholic drink similar to rum, made from sugar cane with a vanilla flavor.

The fourth and last region Francis will visit in Mexico borders the United States. Usually called “Juáritos” by locals, the capital city lies on the Rio Grande, just south of El Paso, Texas. The region is characterized by ranches, so a lot of beef is used in the cuisine here, and while the dishes made with it may not be common for an Argentinian pope, they’ll be familiar to Americans because this is where Tex-Mex has its roots.

Chilaca con queso is a creamy pepper stir fry Pope Francis may enjoy. It’s served with flour tortillas and makes a great entree or side dish for another popular dish from this region, carnes asadas (grilled steaks, cut very thin). For a quintessential Tex-Mex meal, the pope can always reach for a hearty plate of burritos, very typical along the border and a favorite with locals and visitors alike.

The pope will be heading back to Rome from the Juarez airport, and he may want to take dessert with him. He could try capirotada, which is similar to bread pudding. It’s made from slices of the Mexican staple bollilo (a roll with a hard crust), fried in butter and then soaked with a syrup of brown sugar, dry sherry and cinnamon. The bread is then layered in a casserole dish and topped with Chihuahua cheese, raisins, pecans and almonds. It’s baked on low for 20 minutes but generally served cool.

Mexico’s culinary treasures may only be a small part of the pope’s experience, but they’ll surely provide him a powerful reminder of Mexico’s rich traditions, history and diversity.