Looking for Virtue Amid the Sleaze and Slander of Politics 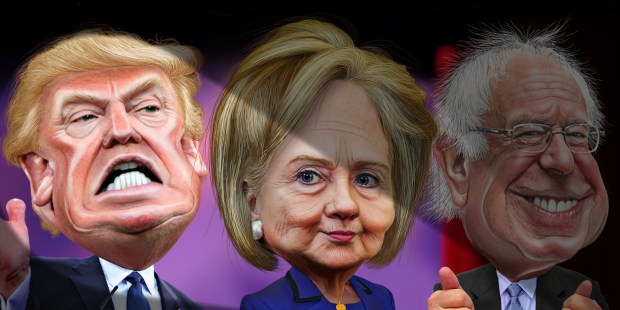 More disturbing than our politicians being crooked, scheming, corrupt and wicked is that our electorate seems not to care

In the midst of the rough and tumble of the American presidential campaign, we are not only seeing the usual dirty tricks, smears, gossip and downright lies, we are also seeing the emergence of a disturbing lack of personal virtue among some of the candidates.

A leading Democrat wallows in accusations of mishandling of confidential communication, historic stories of covering up sexual harassment, tales of large speaking fees from special-interest groups, supporting abortion until birth and a general air of skullduggery, corruption and dishonesty. Meanwhile, a leading Republican uses foul language in public, makes vulgar personal comments about women on stage, is known for being married several times after notorious womanizing, runs casinos, goes bankrupt on purpose and calls publicly for torture, deportation of immigrants and indiscriminate bombing of the enemy.

What is most disturbing is not that some politicians are crooked, scheming, corrupt and wicked but that so many of the electorate don’t seem to care. When issues of personal integrity are raised, the people shrug. When candidates are challenged on their policies about morality, the sacredness of human life and the sanctity of marriage, they dodge the question or give bland answers while their supporters yawn and look away.

The fact of the matter is, any political and economic system is only as good as those who endorse it. There is huge debate about whether democratic socialism or democratic capitalism is best while no one discusses why both systems will stand or fall, not on their own merits, but on the personal virtue of those who promote the system and follow it — both the elected leaders and the people who elect them.

If the leaders and the people are virtuous, then most any political or economic system will work well enough. Catholic writer Hilaire Belloc wrote, “Every argument is a theological argument.” Consequently, the religious leaders may have important things to say about politics and economics than politicians and economists.

Catholic social teaching sets out four very important guiding principles that spring from a profound theological understanding of human beings and human society. The first principle is the sanctity of human life. Every human being is created in God’s image and is therefore eternally precious. This first guiding principle should therefore be the foundation for all political and economic policies. “Life is good!” says the Catholic, and therefore everything that destroys life is bad.

The second guiding principle is that this precious human life comes into existence, is nurtured and formed for success within the human family and that the human family is based on the loving relationship between one man and one woman. Therefore, the entire political and economic system should serve the basic social unit of the family. Economic policies and political plans that undermine and destroy the family are to be avoided while the distribution and administration of money and power should contribute to the strengthening of the family.

The third principle is that of solidarity. The whole human race is one large family. We are brothers and sisters. As the poet John Donne wrote, “No man is an island entire of itself; every man is a piece of the continent, a part of the main.” Economic and political policymakers should keep this in mind. We are not like Cain, who murdered his brother and asked defiantly, “Am I my brother’s keeper?” We are, in fact, our brother’s keeper, and the principle of solidarity reminds us of this responsibility.

The final guiding principle is that of subsidiarity. This means that problems should be solved and initiatives taken at the most local level. The little guy is best. Big government is worst. The locals should decide what is best for them. They are the ones who know their problems and can solve their problems best in a spirit of solidarity with their families and in defense and support of human life where it is lived and loved locally.

These four principles should not only guide political and economic decisions. They should also be the guiding principles of our own personal lives. Unless the voters themselves are pursuing personal virtue they can never be expected to vote for a candidate who is virtuous. An electorate that is grubby and greedy, lustful and lazy, vicious and violent cannot be expected to elect a virtuous president. Society is made up of individuals, and it is impossible to have a virtuous government if the electorate is not virtuous.

Unfortunately the boldest and brashest of the political candidates in the United States not only trample on these four principles, they don’t even seem to know they exist. Furthermore, their yowling and howling enthusiasts don’t seem to know (or care) about such humane principles of civilization.

Catholics need to watch and pray that the candidates who do understand the four guiding principles and who seek to follow them in their own lives will prevail and somehow guide the United States onto the path of virtue.