A Parish on Fire For Christ: What’s the Secret? 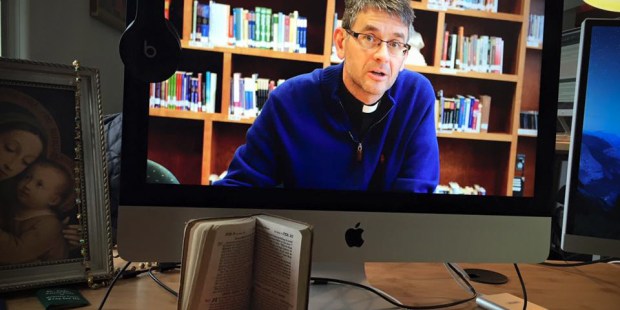 Fr. John Riccardo demonstrates what the New Evangelization should look like

You’ve been baptized, you received the sacraments, you attend Sunday Mass — but do you have a deep friendship with Christ? Fr. John Riccardo understands that for too many Catholics, the answer is no.

As pastor of Our Lady of Good Counsel parish in Plymouth, Michigan, he wanted to help his parishioners deepen their relationship with Christ. What he has done could serve as a model for the New Evangelization.

Inspired in part by Sherry Weddell’s best-selling book Forming Intentional Disciples, Father Riccardo began to transform his parish. In her book, Weddell proposes that would-be evangelizers must first become evangelized themselves. She outlines five stages of spiritual growth which constitute a typical conversion, starting with the baby step of “initial trust” and ending with “intentional discipleship” in which people make a conscious decision to “drop their nets” just as Peter and did when he gave up fishing to follow Christ.

In 2013, Fr. Riccardo offered a reintroduction to the Christian faith using a 10-week program called Alpha. Developed for newcomers to Holy Trinity Brompton Church in London, the Alpha program targets young people with advertisements posing the question “Is there more to life than this?”

The program, typically held in bars and coffee shops, introduces people to basic tenets of Christian faith through videos and discussion, starting with week one’s video “Who is Jesus?” More than 27 million people have gone through the program worldwide, and in 1990 the program debuted in the United States with Alpha USA.

Father Riccardo insists such a back-to-basics program, designed for people without any Christian upbringing, is necessary even for lifelong Catholics. Speaking to Aleteia from his parish office in Plymouth, he discussed Alpha in the context of the archdiocese of Detroit’s upcoming synod on the new evangelization, and its goal to create a culture where those who have misunderstood the gospel to be “ordinary” news will hear it anew and realize — perhaps for the first time — that it is “extraordinarily” good news.

Riccardo emphasizes that his program is more than just another activity on the parish events calendar. “Alpha is a tool that we use to lead people to Jesus.” Among the more than 2,500 participants who have now completed the curriculum at Our Lady of Good Counsel, he said, 15 percent report having had a “life-changing” encounter with Jesus; another sizable percentage, 40 to 60 percent, report having had an encounter.

Asked to comment on Riccardo’s success, Sherry Weddell said that OLGC, “was already a remarkable parish community, and Father John a very remarkable pastor. When I first encountered them five years ago, they were already serious about evangelization. Then, nearly three years ago, Fr. Riccardo read Forming Intentional Disciples. He preached his parish Lenten Mission on the idea of intentional discipleship and the thresholds of conversion. He said that he realized that large numbers of his parishioners had not yet begun the journey of intentional discipleship. So Fr. John and his leadership did something that I have never heard of another parish doing: the parish cancelled all adult formation of any kind in the fall of 2013, and offered the Alpha evangelization course ten times a week. They had 1,000 adults and teens go through, and have never looked back.”

Weddell explained the challenge she outlines in her book:

“I talk about the ‘double in five’ challenge — that a parish which sets out to do so can double the number of intentional disciples in five years, and in so doing, change the whole culture of their community. I’m fairly sure OLGC is already at that point in fewer than three years, and what God is doing there is amazing! They began with great strengths and then went for broke with very gifted leadership.”

With so many eager Catholics having completed the Alpha course, OLGC has now moved from the initial “encounter” phase to focus on “growth.” Fr. Riccardo explained that they have established discipleship groups, each consisting of eight to twelve people meeting in private homes. The parish maintains a library of resources which discipleship groups may use; and Father Riccardo hopes to help other parishes plan their own discipleship groups, as well.

“We think we’re supposed to help figure out how to be a 21st-century church,” he explains. “God is doing something pretty incredible in the world and the Church. He’s asking us to figure out what it means to be a dynamically orthodox and yet very evangelistically bent church.”

As his parish’s program and discipleship groups move forward, Fr. Riccardo — whose compelling talks and homilies are broadcast every weekday on Ave Maria Radio’s “Christ is the Answer” program, and are available as podcasts on iTunes — intends to make videos of the talks available on the OLGC website and their YouTube channel. The parish is partnering with Ave Maria Radio to film their own content, beginning with the introductory series on discipleship.

“It is important to remember,” adds Sherry Weddell, “that the wonderful growth at OLGC is the fruit of many people’s love and labor. Fr. John is a very exceptional preacher and teacher — one of the best I’ve ever encountered — but making disciples doesn’t happen just because you heard a great homily! It takes many disciple-leaders praying and working at many levels and on a sustained basis, and that has been true at OLGC. Continuity of vision is a huge factor in making disciples at the parish, and you need many keepers of the flame in addition to the pastor.”

Kathy Schiffer is a freelance writer and speaker, and writes about faith and culture at her blog Seasons of Grace.