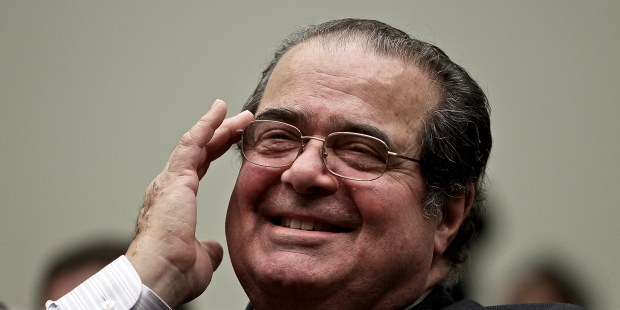 A note to a Presbyterian minister, an unnoticed moment of mercy tell another story about the Supreme Court justice

Supreme Court Justice Antonin Scalia will be remembered by family, friends and colleagues this Saturday as his funeral Mass is offered in Washington’s Basilica of the National Shrine of the Immaculate Conception. But details of the kind of Christian he was have been emerging since his death last week.

A letter that he wrote in 1998, for example, showed that Scalia, a Catholic who preferred to attend the traditional Latin Mass, had an ecumenical side to him, especially when he found common ground with the other party.

After attending the funeral of Justice Lewis F. Powell Jr., which was held at Grace Covenant Presbyterian Church in Richmond, Va., Scalia wrote to Dr. James C. Goodloe to tell him “how reverent and inspiring I found the service that you conducted.”

Scalia lamented that often the eulogy is the centerpiece of a funeral, “rather than (as it was in your church) the Resurrection of Christ, and the eternal life which follows from that.” Praise for the deceased “can cause us to forget that we are praying for, and giving thanks for, God’s inexplicable mercy to a sinner,” he said.

The letter was posted by Goodloe on the Facebook page of his Foundation for Reformed Theology.

Meanwhile, Jeffrey Tucker, of the Foundation for Economic Education, recalled witnessing Scalia’s reaction when the judge was approached by a destitute person in an empty church on a “spring afternoon some years ago.”

“The Mass had ended and most people had gone,” Tucker wrote. “He was still saying prayers, alone in the back pew.” As he got up to leave, a woman approached.

She had lashing sores on her face and hands. They were open sores. There was some disease, and not just physically. She behaved strangely, a troubled person that you meet in large cities and quickly walk away from. A person to avoid and certainly never touch.

Nevertheless, Scalia “took her hands,” Tucker writes. “She leaned in to say something, and she began to cry.”

He held her face next to his, and she talked beneath her tears that were now streaming down his suit. He didn’t flinch. He didn’t try to get away. He just held her while she spoke. This lasted for perhaps more than five minutes. He closed his eyes while she she spoke, gripping her back with his hand.

He stood there with conviction. And love.

Apparently, what Scalia told the woman comforted her, Tucker said, “and she gained composure. She pulled away, ready to go. He held her rough, sore-filled hands and had a few final words that I could not hear. He gave her some money. And then she walked away.” Scalia in turn walked away, “across the green grass, toward the Supreme Court building, alone. He was probably preparing for an afternoon of work.”

Tucker sized up Scalia as “a man who believed in the power of personal contact.”

A theme in his career was human freedom. Scalia believed in it. And why? Because he thought humanity could generate better outcomes than all the planning and all the power ever mustered by the central state. This was a principle he lived.

It’s probably an incident Scalia would not want others to make a fuss about. In a line that might now be seen as instructions to whoever preaches at his funeral, Scalia concluded his 1998 letter to Goodloe:

Perhaps the clergymen who conduct relatively secular services are moved by a desire not to offend the nonbelievers in attendance — whose numbers tend to increase in proportion to the prominence of the deceased. What a great mistake. Weddings and funerals (but especially funerals) are the principal occasions left in modern America when you can preach the Good News not just to the faithful but to those who have never really heard it.