Antonin Scalia and the Politics of the “Bad Person” 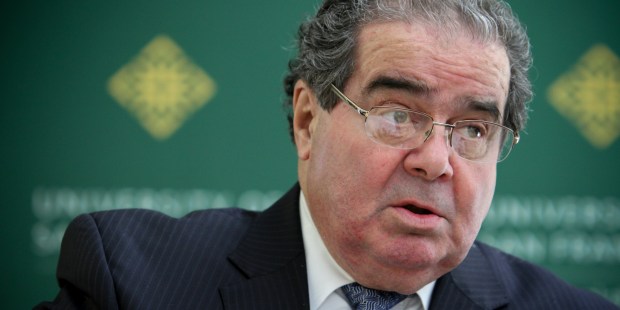 The death of Supreme Court Justice Antonin Scalia inspired some on social media to unleash a torrent of hate, accounting the Jurist as a “bad” and even “evil” person for having expressed himself by the lights of his own reason and faith. It seems appropriate, then to look back this piece by Elizabeth Scalia [no relation] originally published in 2013 at First Things and reprinted here with permission, because it demonstrates how fides et ratio thrive in the tension that exists between the natural and supernatural world, between heaven and earth, as it were. – Editor

It was easy to miss but on June 30 the New York Post carried brief editorial remarks by Michael Goodwin that read:

Count me among those cheering the Supreme Court decisions on gay marriage. At least I was cheering until I read the part of Justice Anthony Kennedy’s opinion where he claims the law he struck down was motivated by hate . . . [that] the law inflicts an “injury and indignity” on gay Americans and reflected a “bare congressional desire to harm a politically unpopular group.” By extension of that logic, those who still oppose same-sex marriage are bigots.

Why yes, that’s precisely why Justice Antonin Scalia, in a dissent that is being called “ intemperate ,” “ blistering ,” “ flaming ,” and “ dripping with contempt and sarcasm ,” wrote:

In the majority’s judgment, any resistance to its holding is beyond the pale of reasoned disagreement. [It is to] “dis-parage,” “injure,” “degrade,” “demean,” and “humiliate” our fellow human beings, our fellow citizens, who are homo-sexual. All that, simply for supporting an Act that did no more than codify an aspect of marriage that had been unquestioned in our society for most of its existence”indeed, had been unquestioned in virtually all societies for virtually all of human history. It is one thing for a society to elect change; it is another for a court of law to impose change by adjudging those who oppose it hostes humani generis , enemies of the human race.

Scalia’s passionate opinions flow from his pen like lava, seemingly indiscriminate, but nevertheless finding every curve and crevice of what lies before them. Often referred to as the “most conservative” of the Supreme Court jurists, Scalia spends part of his Windsor dissent arguing in defense of what used to be considered a most “liberal” notion: that human beings have a right to express their point of view without fear of reprisal; a right to dissent from conventional wisdom; a right, even, to be wrong. It is a sentiment that free-thinkers (of even the recent past) would often express by quoting Evelyn Beatrice Hall’s summary of Voltaire’s thinking: “I disapprove of what you say, but I will defend to the death your right to say it.”

Kennedy’s opinion makes it clear that the days of defending the freedom of others to think and speak outside of the ever-narrowing corridors of what is permissible are numbered; the line of delineation he sketches out is stark, bare, and singular: there will be one (correct) thought or there will be Bad People.

What an illiberal notion!

In his book, Making Money , Terry Pratchett writes “People don’t like change. But make the change fast enough and you go from one type of normal to another.” This has successfully occurred in the issue of gay marriage. Thank goodness our president came to his senses just last year, in mid-reelection campaign; thank goodness his presumed successor, Mrs. Clinton, made it abundantly clear — a scant twelve weeks ago — that she supports gay marriage , saying LGBT Americans “are full and equal citizens and deserve the rights of citizenship.”

Whether the Bad People who argue for tolerance of their own viewpoints will remain “full and equal citizens, etc” remains to be seen. A recent Department of Justice memo on Gay Pride Month chillingly suggested otherwise when it instructed employees to be vocal and visible in their support because, “ silence will be interpreted as disapproval ,” even if one does not especially disapprove. The threat of payback for perceived disapproval did not need spelling out.

In 2009 writer Ada Calhoun “came out” as a Christian to her fellow travelers but did so while hoisting a rainbow flag meant to spare her any social retribution. With a breathlessness that nearly jumped off the page, she insisted she was a Christian, but — as Archie Bunker might have phrased it — “one of the good ones”: “I could reassure my atheist friends that the Episcopal Church is a force for equality and social justice. It ordained its first gay bishop, Gene Robinson, in 2003.”

We will see more of that defensive sort of talk among Christians, as the politics of the Bad Person takes hold, and people rush to prove that “Think Different” is all right for ad campaigns but not for social inclusion.

Antonin Scalia, meanwhile, is now an official Bad Person, but a full reading of his opinion gives evidence that he is not nefarious, but merely nuanced. As Emily Bazelon writes at Slate , “ . . . he directs most of his rage at the five-justice majority, not at proponents of gay marriage . . . . He’s surprisingly OK with ballot initiatives and laws that have approved gay marriage. Scalia doesn’t share the morals of gay marriage supporters, but he is willing to live and let live.”

That’s a very catholic, and Catholic, way of looking at things; it used to be the very definition of liberality and tolerance.

Read more on the faith of Antonin Scalia here.