Biting My Tongue Because Lions Will Lie Down With the Lambs 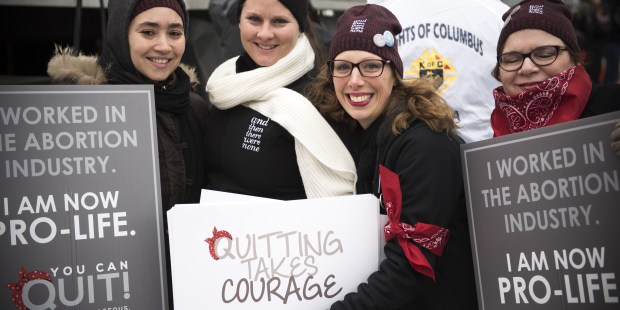 There’s no room for compromise on life issues, but that mustn’t keep us cultivating friendship and understanding

We must admit that the practice of mercy is waning in the wider culture. In some cases the word seems to have dropped out of use. However, without a witness to mercy, life becomes fruitless and sterile, as if sequestered to a barren desert.—Pope Francis, Misericordiae Vultus, para. 10

The poignant, personal statement by Justice Ruth Bader Ginsberg about the death of Antonin Scalia, and the ensuing details of their warm friendship, has brought to mind the close relationship I enjoy with some of my own family members who serve in the political arena — loved ones with whom I have deep differences over the issue of abortion.

My teeth were cut on the campaign trail, as I grew up in a highly political family of Louisiana Democrats, wherein one or more of my immediate relatives have held public office almost continuously since I was born in 1960. Memories of my childhood are replete with door-to-door canvassing, rallies and working long hours alongside my siblings and cousins in various campaign headquarters in New Orleans. There we answered phones, ran endless copies of flyers on Xerox machines and addressed, stamped and sealed envelopes until our fingers were raw. At rallies, we handed out yard signs and bumper stickers, blew up hundreds of colored balloons with helium and sang homespun songs for our candidates. Politics, and its inherent idealism of making the world a better place, was at the center of our lives.

Our boisterous Catholic clan was extremely family oriented, with two lone brothers spawning 19 children in fewer than a dozen years — my parents’ 10 and Uncle Moon and Aunt Verna’s nine. Sundays included shared lunches at Grandma’s house after church, where we lingered to play jacks, card games and jump rope over the dueling smells of Paw Paw’s sweet pipe and Uncle Moon’s strong cigar. I adore the smell of pipes and cigars to this day, as both instantly transport me back to memories of family gatherings over Grandma’s rump roast and gravy.

Summers brought us all together at the rustic camp that Grandma bought on Lake Pontchartrain in 1963, where swimming, fishing, boating, skiing and crabbing kept us, and many of our friends, entertained from dawn until dark in the scorching Southern heat. The pinnacle of summer was our Fourth of July celebration, when we raised the family flag that rested on Paw Paw’s coffin when he died in 1967, and then recited the Pledge of Allegiance and read aloud the Preamble of the U.S. Constitution. Uncle Moon’s short speech about appreciating the gifts of freedom and democracy that we enjoy in our great nation preceded the singing of “America the Beautiful.” We were proud to be Americans and Landrieus.

Sadly, the winds of change crept in during those precious years, bringing with them drugs, rebellion, a confused post-Vatican II church, contraception, radical feminism and the new law of the land, abortion on demand. I was swept up into much of the Cultural Revolution, but somehow, by God’s grace, I always knew with certainty that abortion was wrong. Whether it was the Natural Law or the sensus fidei at work, no one ever had to tell me that killing an unborn child in its mother’s womb was a grievous offense. Furthermore, no one had to convince me that a pregnant woman was carrying an actual child, given the fact that I had nine siblings and numerous cousins, with almost half of them younger than I.

Roe v. Wade was decided in 1973, the year I became a teenager. I didn’t think much about the issue of abortion until senior year in high school, when a close friend of mine became pregnant and had an abortion. Suddenly, what had previously been clearly wrong was now a “necessary choice.” Freedom became associated with the ability to choose for oneself, and even the ability to define reality according to one’s own perceptions. Thus began the slippery slope that slid our nation headlong into 60,000,000 aborted babies, with some of my family members ultimately leading the national charge for abortion rights by way of their political power.

I’ve prayed, fasted and grieved hard about my family’s pro-choice stance over the years — the issue that eventually pushed me firmly into the Republican Party by default. When possible, I’ve tried to persuade those I love to see the light. Some conversations have gone well, others not so much.

I imagine that Justice Scalia must have felt real grief over what he saw unfold before his eyes during his long tenure on the Supreme Court — not only because he was a jurist who believed that the Constitution nowhere permitted a woman the right to abort her child, but also because he was a devout Catholic who firmly believed in the sanctity of human life. Even so, he worked side by side and apparently enjoyed intimate friendship with people who assumed a completely different stance than he did on abortion (as well as on marriage and other moral issues). I was genuinely surprised to learn this fact about him but am heartened by his example, especially during this Year of Mercy when Pope Francis is challenging us to rethink the way we go about relationships, especially at a time in history where mercilessness and rancor seem to rule the day.

Humility and charity demand that we don’t have to fight at every chance we get, don’t have to win every argument or prove we are right all of the time (or even most of the time for that matter). In fact, sometimes we win more through listening, through kindness, through love. That’s one thing that Scalia’s towering legacy is saying to me, and I am taking note.