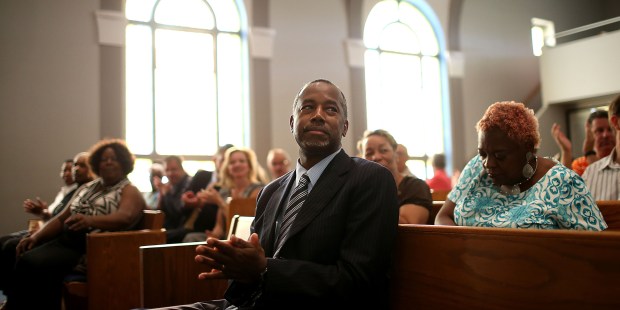 The Republican presidential candidates have descended on my home state of South Carolina this week. They’re all buckling up their Bible belts, putting on their Sunday go-to-meeting best and are praying and playing to win the presidential primary in this most Christian of states.

Before last Saturday’s debate in Greenville’s Peace Center for the Performing Arts, Jeb Bush and Marco Rubio both turned up for Mass at St. Mary’s Church, where Fr. Jay Scott Newman is the pastor. Jeb Bush is a convert to the Catholic faith, and Rubio is a “revert,” having spent a short time as a Mormon and in an Evangelical mega-church before returning to the Catholic church of his upbringing.

Bush and Rubio are not the only ones who wear their cross on their sleeve. Ted Cruz’ father is an Evangelical pastor, and Cruz is happy to proclaim his own Evangelical Protestant faith. Dr. Ben Carson is a member of the Seventh Day Adventist sect, and Governor John Kasich was brought up as a Catholic but belongs to a conservative Anglican church. The New York billionaire Donald Trump also professes to be a Christian, but his profanity, vulgar slurs against women, unfamiliarity with the Bible and what to do in church have not helped endear him to the pious and polite Christians of South Carolina.

The six Republican candidates are hitting South Carolina hard because this state will make or break most of their presidential campaigns. Donald Trump continues to push ahead in the polls, but his debate performance on Saturday and his subsequent “Trumpertantrums” have alienated voters. The state is his to lose. If Dr. Carson does not stage a comeback, he is probably packing his bags to head home. John Kasich is perceived as a moderate, and is not expected to triumph here.

That leaves Bush, Cruz and Rubio, and it is Rubio and Cruz who are playing hardest for the Christian vote. As TIME magazine reports:

Rubio’s events here start with prayer, and his soundtrack is heavy on Christian rock. The first-term senator from Florida tells audiences that members of his family are living paycheck to paycheck so they can send their children to “faith-based schools.” His backers promise that Rubio would never utter profanity the way Donald Trump does. And when asked if he can win South Carolina, Rubio simply says it is up to God.

“God is in control of everything. God has a will for my life and for your life, and for everyone else’s life. Sometimes God’s will is not our will, and we should be grateful for that because he knows a lot more than we do about what is best for us,” Rubio said Sunday in a packed high school auditorium, with 2,000 more supporters listening to audio piped into overflow rooms. “So what I think what we are called to do is to be faithful and do the best we can in every circumstance and pray for God’s peace.”

Being a former Evangelical myself, I can tell you that this kind of language will tickle the ears and inspire the hearts of Evangelicals. Rubio has been a member of an Evangelical church and knows that a passionate, personal faith and willingness to share it is paramount to the Evangelical experience.

With his Evangelical style, Rubio will also appeal to many of the Catholics in South Carolina. Catholics are in the minority here, and because of that we tend to be what George Weigel describes as “Evangelical Catholics.” Rubio’s ability to straddle the Evangelical Catholic divide may be his greatest strength among religious voters.

Bush, Cruz and Carson will also pray to win and play to win, but are the prayers of the candidates no more than a play? One of the reasons Donald Trump is so popular is that conservative Christians have felt betrayed by the very ones they elected who visited their churches, prayed with them and mouthed pious phrases, while in office they seemed to do nothing to uphold Christian family values, did little for the poor and ignored the pro-life agenda. Donald Trump’s surge in support feels like the conservative Christian folks may be saying, “Forget about it. We’re done with the pious politicians. We know Trump’s a scoundrel, but he’s strong, and we think he’ll actually do what he says.”

A Trump victory, therefore may not only be the end of the establishment Republican party. It may be also be the end of any real influence on politics by the forces of Christianity. By choosing Trump, the voters will have also defeated the citizens who were hoping for an experienced, mature and Christian candidate.

On the other hand, Christians of South Carolina might rise up and dismiss the vulgar and proud Trump, believing that the conservative Christians — Bush, Rubio, Cruz and Carson — really are authentic and will deliver.