Dead Ducks: How I Discovered the Real Problem With the Pro-Life Movement 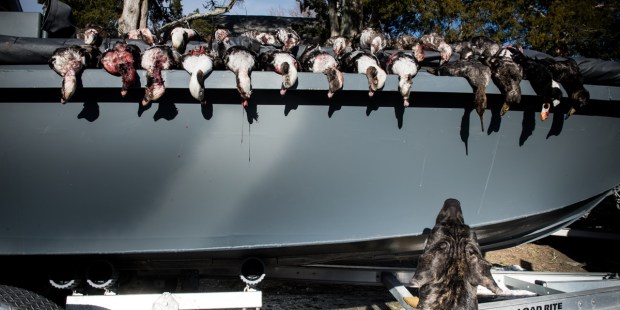 A chance encounter with senseless death brings a realization home

Most mornings I wake up to the sound of distant gunfire. Duck hunters love the marshy areas near where I live.

Recently, while walking my dog, Malla, we happened upon a few duck blinds and boats on their trailers, one of which was arrayed with about 30 dead ducks, neatly laid out, heads hanging down off the gunwale of the boat, as if to make a statement.

As an animal lover and a vegetarian-in-spirit, if not practice, I should have been horrified, but Malla’s reaction trumped my own. She was completely beside herself, sniffing, then recoiling, and then spinning around. It was viral video material, and I confess I laughed in the midst of the horror.

Understand, I have nothing against hunting per se; if you shoot an animal and feed your family with it, who can complain? In this case I walked away fully expecting that the ducks would soon be in someone’s freezer, and good on them.

Later that night, however, Malla and I went for another walk, and, unbelievably, the ducks were still there, drying out and getting ready to rot.

I became furious. Someone killed those ducks (they could have fed a lot of hungry people) just for the sake of killing them? A million not-so-holy thoughts were running through my head about avenging the deaths of ducks.

And then a thought struck home. Earlier that day I had been photographing a group of people from 40 Days for Life, an organization that prays for an end to abortion. This group had been praying in front of a particular abortion clinic since its opening in 2007; they had someone there covering every hour of every day the office was open. Over the years they’d probably prayed a million rosaries. They’ve been insulted, kicked, spat upon, hassled by the police; they’ve endured hurricanes, blizzards, blistering heat, everything you can imagine, yet they keep coming back, counseling women and saving lives.

I realized that when I went to cover their story, I had not felt revulsion similar to what I felt at seeing those ducks. During my time with the activists I had watched at least seven women walk into the clinic and stay there — seven dead babies. Where was my appropriate outrage then? Where was my horror at the reality that unborn children were being shredded and thrown out like trash?

I dragged myself home feeling like a complete loser. Some pro-lifer I was.

Through a sleepless night, I came up with two reasons why I didn’t react — one good, the other not so good. The “good” reason was that I had met these people who were on the front lines of this battle. They told me they were there to “Love the people,” all of them, everyone from the abortionist, the workers, the girls going in, their boyfriends, the mothers. They told me that the “secret” to their work was to stay in a state of Grace, receive the Holy Eucharist and bring Christ to this place through prayer and love. They were admirable, heroic people, and (for me) a distraction from the house of horrors they prayed before, every day.

The “not so good” reason is that I had, like most Americans, become numb to the reality of abortion.

This might be the biggest problem that the pro-life movement currently faces: getting through to people who have seen all of the images, and heard all the stories, and have become anesthetized to it all. The normalization of abortion has trained us to treat abortion as an “issue” which creates a kind of distance from the reality of dead children and violated women. An “issue” is something you find an opinion on, and then stop thinking, or really knowing.

Is becoming numb my fault? Is it any of ours? We hear repeatedly about human trafficking, refugees, religious persecution. We know it’s all evil, but do we take up action about it? If the answer is no, then why not?

Well, for one thing, proximity. When I saw the ducks, it was in-my-face, unignorable and real. Abortion seems like it’s far away most of the time, like the refugees, and the trafficking victims, but the reality is that with 57 million deaths over 40 years, it has to be right next door, and at your job and perhaps even in your family.

I think I’m awake now. And maybe those ducks did not die in vain after all.