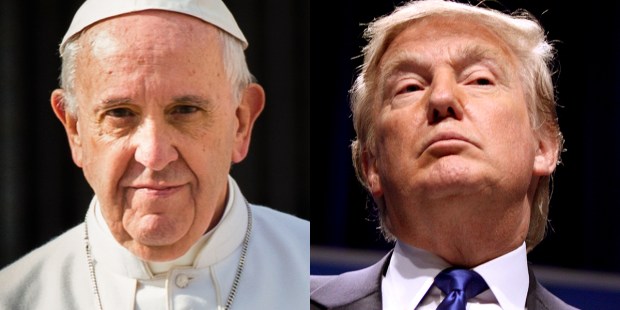 It’s too easy to be an ideologue

Last week a friend sent me a story with a provocative headline: “Pope embraces Castro but calls Trump anti-Christian!”

But what I wanted to tell him is that he needs to change his perspective.

The Catholic faith is not an ideology or a political party, but many Catholics are ideologues or partisans. The run-in between Donald Trump and the pope provides a perfect example.

It all started when the pope answered a question about Trump’s immigration proposal on the flight from Mexico to Rome.

Pope Francis did what he often does: He used the question to repeat the fundamental message of his papacy, which is that Christians are here to help the world, not cut themselves off from it. He said, “A person who thinks only about building walls, wherever they may be, and not building bridges, is not Christian.”

He hastened to add that he won’t counsel how to vote, and gives “the benefit of the doubt” to Trump himself.

Trump used the run-in to do what Trump usually does: make a strong, defiant image of himself the center of attention at a critical vote-getting time. “For a religious leader to question a person’s faith is disgraceful,” he said.

Their answers revealed much about who they are.

The pope is principle-centered. To a principle-centered man, the truth is a rock. Our job is to stand on it and never move. The principle here: Every human being is made in the infinite dignity of the image and likeness of God. When we see a stranger, we try to find a way to welcome that person. When we see the foreigner by the side of the road, we go out of our way to serve him or her.

But my friend’s e-mail showed a third tendency that shows up in many American Catholics: we become ideologues.

If principle-centered people see the truth as a rock to cling to and pragmatists see “truths” as stepping stones to walk on, ideologues hold their truth like a rock they want to crush you with.

Ideologues mistake a part of the truth for the whole. A Marxist or hyper-capitalist ideologue thinks of a person as an economic being and will crush the rest of him in pursuit of his labor or consumption. A power-centered ideologue will see a person as a partisan pawn and will treat her well or poorly dependent on how she helps or hurts a political cause.

At the turn of the 19th century, many Americans decided that Italian immigrants were reducible to their economic dimension: They were poor and unskilled labor. Or they were reducible to their religious dimension: They were unlearned Catholics, the pawns of priests incapable of being the right kind of Americans. So ideologues moved to keep them out.

Yes, they were convinced they had good reasons to fear Italians. Fine. They should have found ways to mitigate the fear while holding fast to the principle, not the other way around.

In the Francis versus Trump immigration battle, many Catholics immediately reverted to our own ideological tendencies in exactly the same way. Let me be clear: I am not saying it is easy to avoid ideology. It isn’t. And I am not saying I have personally somehow overcome the struggle. I haven’t. I just want to show where the struggle lies.

The first thing many Catholics did was complain that Pope Francis was getting “too involved in politics” — ironically imitating the very ideologues who said Pope John Paul II shouldn’t speak out against abortion in America, or who criticized Pope Francis when news reports said he called the mayor of Rome a “pretend Catholic” because he supports gay marriage and euthanasia.

In fact, the pope should “get involved in politics” by showing us what principles are at stake in hotly debated questions.

Second, they resurrected the old “the Vatican is surrounded by giant walls!” gotcha argument that is always trotted out against the pope on immigration.

You can tell this is an ideological argument because it willfully distorts the truth to serve an agenda, rather than embracing the truth and letting it set the agenda. As many who make this argument well know, you can hopscotch backward into St. Peter’s Square wearing a chicken suit if you want to. It is far easier to enter Vatican City from the south than, say, Nogales, Ariz. And it is not the least bit scandalous that the Vatican Gardens have as much security as the Rose Garden.

We cannot avoid politics. As Pope Francis said in response to the same question, “Aristotle defined the human person as ‘political animal’” — a person who lives in community with others.

Our job is to apply principles to politics, and even work with political parties in service of those principles.

But ultimately, we are Catholics. We follow a person, Jesus Christ, who is “the way, the truth and the life.”