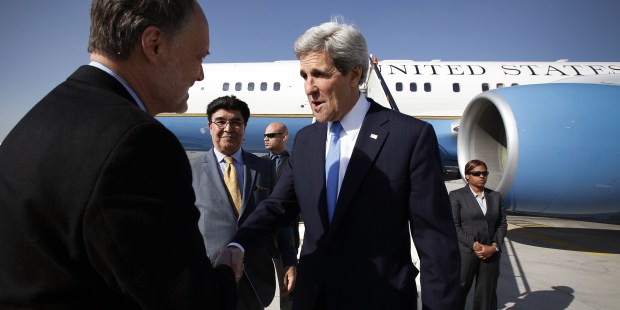 Kerry has until March 16 to make designation

As news broke Monday of a plan for a ceasefire in Syria, observers are still fearful that the US State Department will ignore Christians in an expected designation of genocide in the Middle East.

Now, a new effort will try to push Secretary of State John F. Kerry to not leave Christians out.

A petition launched by In Defense of Christians and the Knights of Columbus is urging Kerry not to exclude Christians from a declaration of genocide at the hands ISIS. The petition can be signed at www.StopTheChristianGenocide.org.

“Christians in Iraq and Syria have suffered injustice after injustice by being kidnapped, killed, having their homes and churches confiscated or destroyed, and being forced to flee for their lives. Because of jihadist hit squads, they fear to enter UN refugee camps and, as a result, are then often excluded from immigration to the West,” said Carl Anderson, CEO of the Knights of Columbus, who testified on the matter before a congressional subcommittee in December. “After all of this, these people deserve to have the U.S. State Department call what has happened to them by its rightful name: genocide — just as the European Parliament, Pope Francis, USCIRF and so many other prominent individuals and institutions have already done.”

The State Department is required by law to make a designation one way or the other on the matter by mid-March.

Noting the “extensive and irrefutable evidence” that the so-called Islamic State’s actions toward Iraqi and Syrian Christians, as well as Yazidis and other vulnerable minorities, meet the criteria outlined by the United Nations Convention on the Prevention and Punishment of the Crime of Genocide, the petition explains that the evidence includes:

• sexual enslavement and systematic rape of girls and women

• destruction of Christian churches, monasteries, cemeteries, and artifacts
The petition also notes that ISIS’ own public statements take “credit” for the murder of Christians precisely because they are Christian and express its intent to wholly eradicate Christian and other minority communities from its “Islamic State.”

In a common declaration signed in Havana Feb. 12, Pope Francis and Patriarch Kirill of the Russian Orthodox Church stated that in Iraq and Syria “whole families, villages and cities of our brothers and sisters in Christ are being completely exterminated.” The week before, the European Parliament passed a resolution declaring that ISIS “is committing genocide against Christians and Yazidis” and “other religious and ethnic minorities.”

In a recent op-ed for National Review, international religious freedom activist Nina Shea explained that in October the State Department leaked information that it would be issuing a designation of genocide, but recognize only Yazidis as victims. “This prompted Congress to mandate that Secretary John Kerry make a determination by March 16 on the precise question of whether “persecution . . . of Christians and people of other religions in the Middle East by violent Islamic extremists . . . constitutes genocide,” wrote Shea, director of the Hudson Institute’s Center for Religious Freedom. “Whether the official U.S. list of genocide victims includes or excludes Christians will affect the persecuted Christians enormously: in raising humanitarian aid, receiving asylum, overcoming de facto discrimination in U.N. resettlement programs, receiving restitution and reparation for seized land, and securing a place at the peace-negotiations table. It would also give these two-millennia-old Christian communities a sense of justice – something that still matters greatly to the families of Holocaust victims and that eludes the Armenian community.”