“Dear Pope Francis … What Did God Do Before He Made the World?” 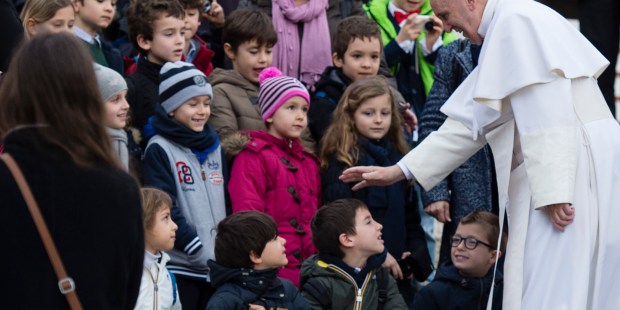 VATICAN CITY — Children from 26 countries and six continents have sent Pope Francis their questions, and the pontiff has answered them in a new book, Dear Pope Francis, due out March 1.

According to Vatican Radio, the U.S.-based Jesuit publishing house, Loyola Press, approached Pope Francis about the idea last year and received a positive response. They then asked Jesuits from around the world to collect questions from children ages six to 13, including Catholics and non-Catholics. They also asked the children to send drawings, which are included in the book.

They received 259 questions from 26 countries in 14 languages. The book’s editor, Fr. Paul Campbell, SJ, then sat down with a committee and chose the questions to send the pope.

“One of the lines we use to describe this book is: Little children have big questions,” Fr. Campbell told Vatican Radio. “Yes, they are questions from little children, but they are very, very profound questions. The Holy Father was very clear that it was terribly difficult to answer these questions.”

The Jesuit priest said one thing that comes out of reading the book is the Holy Father’s profound sensitivity to the suffering of children around the world.

“I believe it was William from the United States who asked the question if you could cause one miracle … what would it be? And the Holy Father said, ‘To stop the suffering of children,’” Fr. Campbell explained, “and it is very clear to me that the Holy Father’s heart is full of compassion for those who suffer.”

This book is only a small way of giving suffering people hope.

“The Holy Father wants to reach out to children and adults to everyone who experiences suffering – which means all of us – to tell us that he does not understand suffering, that he cannot explain it, but that he does believe that Jesus did suffer for us, and that is the only thing that gives him hope and comfort,” Father Campbell said.