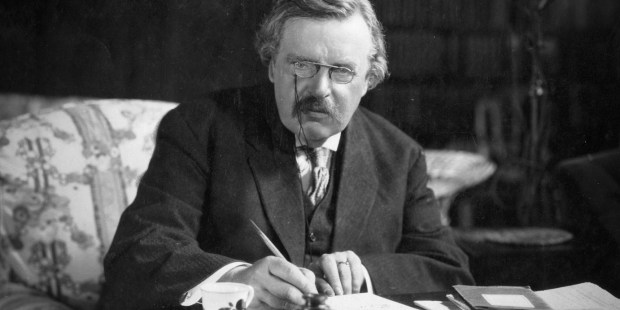 Every age believes its madness is unprecedented, but we humans tend to repeat ourselves …

When we look at headlines and newsmakers, and people in leadership and media, it is tempting to throw our hands to heaven and think, The world is mad and out of control, and to believe that the brokenness of the era is unmatched in any previous era.

But every student of history knows this is not true. Thanks to original sin, every era is broken except where it has been reclaimed by Christ Jesus, soul by soul, through his death and resurrection. Plato complained about the state of the world; the psalmist expressed human feelings and urges that plague us today. Truly, every age believes its madness is unprecedented.

When it begins to feel overwhelming, it’s good to turn to G. K. Chesterton, who saw the world as it is, found the human paradoxes that originate from our collective unwellness, and also the God-paradoxes that console, delight and surprise us. A few lines of Chesterton and the equilibrium of our reasoning seems to kick in. To that end, here are 30 helpful lines from Chesterton to help shape perspective — and perhaps tickle your sense of humor.

1) Our civilization has decided, and very justly decided, that determining the guilt or innocence of men is a thing too important to be trusted to trained men. It wishes for light upon that awful matter, it asks men to know no more law than I know, but who can feel the thing that I felt in the jury box. When it wants a library catalogued, or the solar system discovered, or any trifle of that kind, it uses up its specialists. But when it wishes anything done which is really serious, it collects twelve of the ordinary men standing round. The same thing was done, if I remember right, by the founder of Christianity.—Tremendous Trifles

2) When a man says that democracy is false because most people are stupid, hit him smartly and with precision on the exact tip of the nose.—Illustrated London News (ILN), 1905

3) It cannot be too often repeated that all real democracy is an attempt (like that of a jolly hostess) to bring the shy people out. For every practical purpose of a political state, for every practical purpose of a tea party, he that abaseth himself must be exalted. At a tea party it is equally obvious that he that exalteth himself must be abased, if possible without bodily violence. Now people talk of democracy as being coarse and turbulent; it is a self-evident error in mere history. Aristocracy is the thing that is always coarse and turbulent; for it means appealing to the self-confident people. Democracy means appealing to the diffident people. Democracy means getting those people to vote who would never have the cheek to govern; and (according to Christian ethics) the precise people who ought to govern are the people who have not the cheek to do it.—Tremendous Trifles

4) Democracy is not philanthropy; it is not even altruism or social reform. Democracy is not founded on pity for the common man; democracy is founded on reverence for the common man, or, if you will, even on fear of him. It does not champion man because man is so miserable, but because man is so sublime. It does not object so much to the ordinary man being a slave as to his not being a king, for its dream is always the dream of the first Roman republic, a nation of kings.—Heretics

5) A new philosophy generally means in practice the praise of some old vice.—ILN, 1906

6) The man who is content to say, “We do not want theologians splitting hairs,” will doubtless be content to go on and say, “We do not want surgeons splitting filaments more delicate than hairs.” It is the fact that many a man would be dead today if his doctors had not debated the fine shades about doctoring. It is also the fact that European civilization would be dead today if its doctors of divinity had not debated fine shades about doctrine.—“The Resurrection of Rome”

8) It is one of the journalist’s tragedies that whenever he introduces a thing purely as an impossibility, someone writes to say that it really occurred. If I use a foolish metaphor at random, I generally receive two letters — one complaining that the thing is too violent and absurd, the other saying that it happened to the writer’s aunt.—ILN, 1906

9) Reason itself is a matter of faith. It is an act of faith to assert that our thoughts have any relation to reality at all.—Orthodoxy

10) There are a hundred magazines, but only about five stories.—ILN 1926

11) The quicker goes the journalist the slower go his thoughts. The result is the newspaper of our time, which every day can be delivered earlier and earlier, and which every day is less worth delivering at all.—Eugenics and Other Evils

12) Obedience. The most thrilling word in the world; a very thunderclap of a word. Why do these fools fancy that the soul is only free when it disagrees with the common command? Even the mobs who rise to burn and destroy owe all their granduer and terror, and a sort of authority, not to their anger, but to their agreement. Why should mere disagreement make us feel free?—“The Surprise”

13) People will tell you that theology became too elaborate because it was dead. Believe me, if it had been dead it would never have become too elaborate; it is only the live tree that grows too many branches.—Tremendous Trifles

15) The Declaration of Independence dogmatically bases all rights on the fact that God created all men equal; and it is right; for if they were not created equal, they were certainly evolved unequal. There is no basis for democracy except in a dogma about the divine origin of man.—What I Saw in America

16) If people cannot mind their own business it cannot be more economical to pay them to mind each other’s business; and still less to mind each other’s babies; it is simply throwing away a natural force and then paying for an artificial force: as if a man were to water a plant with a hose while holding up an umbrella to protect it from the rain.—The Superstition of Divorce

17) When you choose anything, you reject everything else.—Orthodoxy

19) Our fathers did not talk about psychology; they talked about a knowledge of Human Nature. But they had it, and we have not. They knew by instinct all that we have ignored by the help of information. For it is exactly the first facts about human nature that are now being ignored by humanity.—“Sidelights”

20) Take away the supernatural, and what remains is the unnatural.—Heretics

22) To have a right to do a thing is not at all the same as to be right in doing it.—A Short History of England

23) Right is right, even if nobody does it. Wrong is wrong, even if everybody is wrong about it.—All Things Considered

24) I have a notion that the real advice I could give to a young journalist is simply this: to write an article for the Sporting Times and one for the Church Times and put them in the wrong envelopes … what is really the matter with almost every paper is that it is much too full of things suitable to the paper.—Autobiography

25) The new school of art and thought does indeed wear an air of audacity, and breaks out everywhere into blasphemies, as if it required any courage to say a blasphemy. There is only one thing that requires real courage to say, and that is a truism.—“G. F. Watts”

27) It is easy to be heavy: hard to be light. Satan fell by the force of gravity.—Orthodoxy

29) Man is an exception, whatever else he is. If he is not the image of God, then he is a disease of the dust. If it is not true that a divine being fell, then we can only say that one of the animals went entirely off its head. … Man is always something worse or something better than an animal; and a mere argument from animal perfection never touches him at all. Thus, in sex no animal is either chivalrous or obscene. And thus no animal ever invented anything so bad as drunkenness — or so good as drink.—ILN 1907

30) The self is more distant than any star.—Orthodoxy