In Memory of Miriam Woldu: Pope Grieves a “Member of His Family” 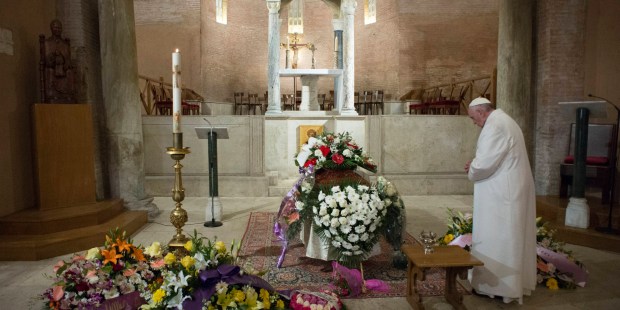 AFP / OSSERVATORE ROMANO
Pope Francis pays his respects in front of the coffin of his late secretary Miriam Wuolou at the Vatican on February 27, 2016.
Miriam Wuolou, 34, was seven months pregnant, and had worked at Pope Francis’ home and a priests’ guest house called Santa Marta for four years. Ms Wuolou had a serious kind of diabetes, and doctors had warned her that her pregnancy was at risk. / AFP / OSSERVATORE ROMANO / - / RESTRICTED TO EDITORIAL USE - MANDATORY CREDIT "AFP PHOTO / OSSERVATORE ROMANO" - NO MARKETING NO ADVERTISING CAMPAIGNS - DISTRIBUTED AS A SERVICE TO CLIENTS
Share
Print
Robert Moynihan - published on 03/01/16

“The weight of the world is not for our shoulders, Robert,” she told me

There is a sadness in things, in this world where all things pass away.

And so I write this “in memoriam” — for a memory.

For a memory of a young woman named Miriam.

A woman of extraordinary beauty and grace, who filled the space around her with a special light.

She was one of the several receptionists of the Domus Santa Marta, the Vatican residence where Pope Francis has lived since his election three years ago. She worked there also for several years before the pope arrived.

For this reason Miriam has been described in the press as “the pope’s receptionist.” She greeted him each day, and after dinner, when she was on the desk, Francis would greet her and wish her good night as he went up to his room. In this sense, she was part of “the pope’s family.”

For those guests of the Holy See who stay in the Domus Santa Marta for a day, or three, or five, Miriam was an unfailing light, a ready resource, a trusted friend.

Though of Eritrean descent — her parents were immigrants — she had lived all her life in Italy and was Italian. Her Italian was perfect, but she also spoke English beautifully, even eloquently.

Of all the receptionists in the Domus Santa Marta, she had the sunniest disposition. Francis nodded and smiled to her each day when she was on duty for the past three years. He called her “the queen of the house.” He liked her friendliness and smile.

I too knew Miriam. To me, she was a kind and good friend. She often urged me not to be “so serious,” and not to worry so much about things. “The weight of the world is not for our shoulders, Robert,” she told me.

She was an honest person. She could be blunt in her judgments, discerning right from wrong, good from evil with unerring accuracy.

She lived for many years at home with her parents. Some time ago she was engaged to be married. She said she was “so happy” at the prospect of marriage and of having a family of her own.

She was married in a Catholic Mass, and a Vatican monsignor officiated at the wedding.

Newly married, she got pregnant and was overjoyed. But then she lost that baby during the first months of pregnancy, and she was very sad.

After that, for various reasons that must remain in the privacy of their intimacy, she and her husband separated.

She began to live alone in an apartment not far from the Vatican.

Her story echoes that of so many in our world. She had her share of loneliness, of solitary struggle to work, pay the rent, shop, cook, live life day by day.

She was still working in the Domus in December, and I saw her then, but during January she began to ask for days of sick leave, and in early February, she asked for several days off in a row.

That was about three weeks ago.

On about February 10 — the exact day and time of her death is uncertain — she passed from this world.

For several days she lay, fully clothed, lifeless in her bed in her apartment.

She was alone. The doors, as investigators later determined, were locked from the inside. There was no sign of foul play, of any intruder or anyone who had caused her harm.

She was not found until her brother, Simon, trying unsuccessfully to reach her by telephone, realized she had not answered her phone for too long. He contacted authorities, who went to the apartment, found the door locked and forced it open, to find her already dead for several days.

A full investigation of her death has now determined that she died from a diabetes-induced coma, from which she did not awaken.

It was also discovered, in a final, even more sorrowful detail in this sad story that she was seven months pregnant with a little girl, who died in her womb. The two were buried together.

The funeral Mass took place Saturday, February 27 in St. Stephen’s Church, the church of the Ethiopian pilgrims inside Vatican City, just behind St. Peter’s Basilica, and, appropriately, just at the beginning of the peaceful Vatican gardens.

Pope Francis spent 20 minutes in solitary prayer beside her coffin, showing clearly his profound grief at her death.

Ironically, Pope Francis, at the very time news of Miriam’s death was becoming public, on February 22, and delivered a homily to the members of the Roman Curia. The occasion was the Jubilee Year of Mercy Mass for the Roman Curia.

“In our workplaces too may we feel, cultivate and practice a strong pastoral sense, especially toward the people we encounter every day,” Francis said. “May no one feel neglected or mistreated, but may everyone be able to experience, especially here, the loving care of the Good Shepherd.”

Miriam’s light has been extinguished now, in this world. She left us without saying good-bye.

And so we would like to say to Miriam, thank you for the goodness and light that you shined with during your brief life.

May your soul find peace in the Lord. May eternal light shine upon you, unto ages of ages. Amen.

Dr. Robert Moynihan is founder and editor-in-chief of Inside the Vatican magazine.