How Should We Pray When it Comes to Politicians? 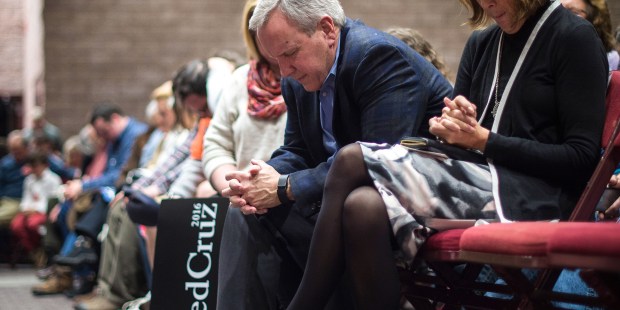 Put not your trust in princes, warned the psalmist

“Put no trust in princes,

in children of Adam powerless to save.

Who breathing his last, returns to the earth;

that day all his planning comes to nothing.”

On Super Tuesday my Facebook feed — the Republican-leaning part of it, anyway — looked almost like a prayer revival. Every other post was a meme, link or heartfelt treatise begging people not just to head to the polls today but to get down on their knees and pray for their chosen candidate’s victory.

At the same time, other posts were alternately highlighting or lambasting the “records” of various candidates — not on the issues but on their public displays of faith: Marco Rubio stopped a couple of campaign rallies to pray for audience members who fell ill. Ted Cruz has a whole team of “prayer warriors” and — if his critics on the secular left and supporters on the far Christian right can be believed — will rule the United States by “putting the Bible first,” perhaps even before the Constitution. Evangelical leaders broke decades-long political silences to warn their flocks against voting for Donald Trump, who claims to be a Christian but says he has “never asked God for forgiveness” for anything, despite a litany of very public sins.

Underlying all this primary-day religious fervor was an almost apocalyptic vibe — a feeling that the United States is headed straight for the edge of an endless abyss, and the choices voters make in the coming weeks and months could mean the difference between careening into the void at top speed or hitting the brakes just in time. The unexpected death of Supreme Court Justice Antonin Scalia only served to raise the stakes, leaving some American Christians fearful, as if their last bastion of protection against radical secularism sweeping the nation had been ripped away. In the wake of his death, calls for prayer and political action by Christians grew even louder.

The problem was (and is) most are praying for the wrong things.

It may be true that our nation is at a critical turning point, and perhaps it is also true that prayer has “never been more important than it is right now,” as the social media feeds read. But praying for a specific candidate’s victory is not the answer. The Bible says, “Put no trust in princes,” and that’s right. Politicians are just people, deeply flawed men and women who will always, always let you down.

Read that again, and let it sink in: Politicians will always. Let. You. Down.

Not one of these candidates — not Trump, not Cruz, not Rubio, not Clinton, not Sanders, not any of the also-rans who’ve closed up shop in recent weeks — will ever keep the majority of promises they’ve made during this or any campaign. They can’t. America’s limited presidency is by design; we don’t like kings or princes. No U.S. president has the power to “build a wall” to keep immigrants out. No U.S. president can singlehandedly overturn Obamacare, get rid of the tax code, implement universal single-payer health care, make college free, put an end to legalized abortion or any of the other pie-in-the-sky promises we’re hearing.

When I see people declaring that only one man (or woman) can “save” America, I cringe; regardless of the outcome of this year’s elections, those who place their faith in princes risk having their faith destroyed. And what shall fill that void?

The best prayer is the one Jesus taught us: “Thy will be done.” Rather than praying for a specific candidate’s victory — as though we know anything — humbly pray that God’s purposes are served or, failing that, pray for every candidate, even the ones you dislike: That they would be open to the Holy Spirit’s guidance, seek to do what’s best for our nation and strive to be better, more virtuous people. That the winner, whoever that finally is, will be blessed with what Solomon asked for and received, “an understanding heart” and plenty of God-given grace.

Kirsten Andersen is a senior writer for Aleteia. She has more than 15 years of experience working in and commenting on U.S. politics. During the 2000 elections she worked for presidential candidate Steve Forbes in the Republican primaries.