Giving What Is Holy to Dogs 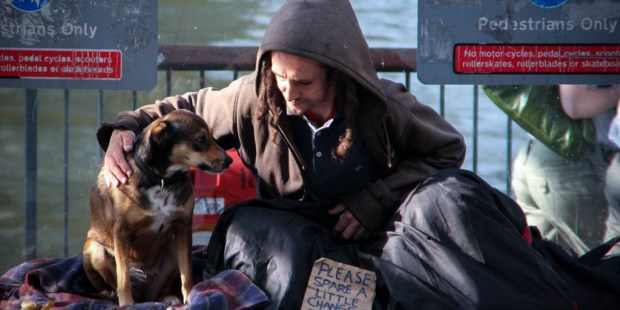 A lesson learned in front of the Blessed Sacrament

The Spouse of Christ must pattern her behaviour after the Son of God who went out to everyone without exception.—Pope Francis, Misericordiae Vultus, par. 12

Seeing with the eyes of Christ, I can give to others much more than their own outward necessities; I can give them the look of love which they crave. Here we see the necessary interplay between love of God and love of neighbor which the First Letter of John speaks of with such insistence. If I have no contact whatsoever with God in my life, then I cannot see in the other anything more than the other, and I am incapable of seeing in him the image of God.… Only my readiness to encounter my neighbor and to show him love makes me sensitive to God as well.

I was reading the Encyclical as a personal penance for my habitual sin of judging others, which I had confessed to a priest only four days earlier. And before I knew it my pernicious habit took over, and I began thinking about a particular political candidate whom I consider to be perfectly godless. He clearly has no contact with God, I thought, reflecting on the words of the Encyclical. “That’s pretty obvious by the way he assumes that all immigrants are enemies with malicious intent, instead of seeing them as God’s children who are genuinely in need of mercy. Jesus, teach me to love my neighbor,” I prayed, “and to see you in those in need.”

While I pondered these thoughts, a man knocked on the chapel door, indicating that he was not a regular since he didn’t know the code to let himself in. Leaning over in my chair to open the glass door, my eyes met those of a disheveled, tattooed 20-something-looking person with long, dirty hair. He came in and took a seat in the leather chair across the aisle from mine and then began to stare into space, looking quite disturbed. My first instinct was to thank God that there was another woman in the chapel with me, because the man was suspicious-looking at best. I then began to wonder if he was a drug addict in need of money and thanked God that my purse was locked in my car. After about 10 minutes of his aimless staring, I started to feel frightened, as I sensed he was up to something sinister. Just then, he stood up to leave.

“Can you open the door for me again when I come back?” the stranger asked. “I forgot something in my car.”

“Sure.” I smiled stiffly, thinking: Oh, dear God, what could he be going to get from his car? My heart began to race as my mind ran off on a tangent, and within 60 seconds of the stranger’s departure I had concluded that he was going to get a gun from his vehicle, and I was facing imminent death as a martyr right in front of the Blessed Sacrament.

“Excuse me,” I impulsively whispered to the woman seated in front of the chapel, who was completely oblivious to the stranger. “I think the man who just came in is unstable, and he went to get something from his car. I’m scared of what he’s going to do. Do you think we should call for help?” I asked, motioning to the phone on the wall.

Before she had a chance to answer, the stranger knocked on the door again, and I squinted through the glass to see if he was carrying a weapon. Seeing nothing, I bent over again to let him in, this time quite haltingly.

“I forgot this in my car,” he said as he reached into his pocket. I held my breath. Out came an empty holy water bottle, which he simply wanted to fill. “My dog is dying, and I figured I’d try blessing him as a last resort.” He smiled, suddenly looking innocent as a lamb.

I reached into the drawer next to me to retrieve the holy water bottle and watched shame-faced as he filled his little container with the blessed sacramental.

“Take the wooden beam out of my eye, Lord,” I prayed after the poor man left, embarrassed over my judgment of both him and the political candidate.

I had definitely gotten the point. And I could almost hear God giggling in the silence.