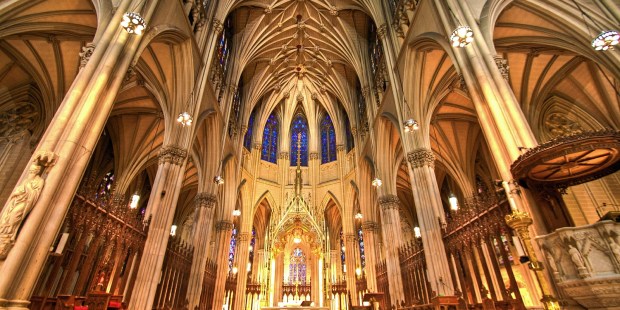 What would you say if, going through a coffee table book, you found a loose stamp of Robert Francis Kennedy’s burial Mass, a report of a cathedral debt fund from 1910 or a Roman missal dated back to 1941?

Well, all of that (and way more) is included in a new book that Timothy Cardinal Dolan, archbishop of New York City, has prepared to celebrate the coming to an end of an exhausting renovation process that took a bit less than four years, from May 2012 to December 2015.

Since its opening in 1879 (one reads in the book’s inner flap), St. Patrick’s Cathedral has provided the faithful of New York, and the world, a place to find God amidst the hustle and bustle of Manhattan.

Published by Éditions Du Signe, this astonishing coffee table book is an exacting and minute compilation of the story not only of the building itself but of its builders, visitors, contributors and the faithful who gather under its marble-white pointed arches. Such a story is narrated by Cardinal Dolan himself but also by distinguished invited authors, including Dr. Henry Kissinger and Stephen Colbert, among others.

The book is a guided tour across more than a hundred years of images; it takes you from astounding photos of intricate gothic architectural details, through impeccably reproduced never-before-seen documents of the Archdiocese of New York, to the newest pics of the temple’s renovation, including, as a kind of bonus, a copy of the Liturgy of the Hours with Pope Francis from his recent September 2015 visit to the city.

This is, indeed, as they say at the Cathedral’s gift shop, just like “taking home with you a piece of America’s parish church.” You can buy the book online here, or, even better, while visiting St. Patrick’s on your next visit to the Big Apple.