A Cause for Joy: Mother Teresa’s Canonization Date to Be Announced Next Week 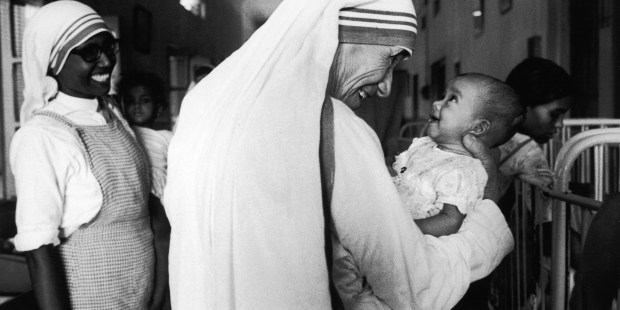 VATICAN CITY — Pope Francis will sign the decree for the canonization of Mother Teresa of Calcutta on March 15, the Vatican announced today. The date and location of the canonization Mass are also expected to be announced.

According to a statement issued on Monday by the Office of Liturgical Celebrations of the Supreme Pontiff: “On Tuesday, March 15, at 10 a.m., in the Consistory Hall of the Vatican Apostolic Palace, the Holy Father Francis will preside at the celebration of terce and the Public Ordinary Consistory for the Canonization” of Blessed Mother Teresa of Calcutta and four other of blesseds.

Pope Francis approved a miracle attributed to the intercession of Mother Teresa last December 17, thus paving the way for her canonization. The miracle involved the healing of a now 42-year-old mechanical engineer in Santos, Brazil. Doctors had diagnosed the man with a viral brain infection that resulted in multiple brain abscesses. Attempts at treatment were ineffective, and the man went into a coma, the postulator wrote.

The newly married man’s wife prayed for months to Blessed Teresa, until her dying husband was taken to the operating room December 9, 2008.

When the surgeon entered the operating room, he reported that he found the patient awake, free of pain and asking, “What am I doing here?” Doctors reported the man showed no more symptoms. On September 15, A Vatican medical commission voted unanimously that the healing was inexplicable.

Pope St. John Paul II waved the customary canonization process in Mother Teresa’s case, allowing her cause to be opened before the five-year customary wait. Pope John Paul II beatified her on October 19, 2003, after he recognized the miraculous healing of an Indian woman with a tumor in her abdomen.

Born Agnes Gonxha Bojaxhiu‎ of Albanian parents on ‎August 26, 1910, in Skopje, in present-day ‎Macedonia, Mother Teresa died in Calcutta on September 5, ‎‎1997. ‎Affectionately known as the “saint of the gutter” for her unconditional ‎love ‎for the poor, abandoned and marginalized, she earned several international honors, including ‎the ‎Nobel Peace prize in 1979.

At the March 15 public consistory, Pope Francis will also sign the canonization decrees for the Mexican José Sanchez del Rio, a 15-year old lay martyr put to death by government officials in Mexico in 1928 for refusing to renounce his Catholic faith. José’s story and martyrdom were vividly portrayed in the 2012 movie For Greater Glory.

Those to be canonized also include Stanislaus of Jesus and Mary, born John Papczynski, who lived in 1600 and founded the Congregation of the Marian Clerics of the Immaculate Conception of the Blessed Virgin Mary; Mary Elizabeth Hesselblad, a Swedish nun who founded the Congregation of the Most Holy Savior of Saint Bridget; and Giuseppe Gabriele del Rosario Brochero, an Argentinian diocesan priest better known as “Fr. Brochero,” for whom Pope Francis holds a particular affection.

When he beatified him in September 2013, the pope called him “a pioneer in going out to the geographical and existential peripheries to bring love and God’s mercy to everyone.” Born in 1840 in Córdoba, Argentina, he dedicated his life “to going out to seek the people,” the pope wrote fewer than three years ago. The Argentine priest would travel for miles on a mule to the most disadvantaged and remote areas. He died in January 1914 in Villa del Transito, which shortly afterward was renamed Villa Cura Brochero.