How Alan Rickman’s Views on Villains Can Instruct Our Faith 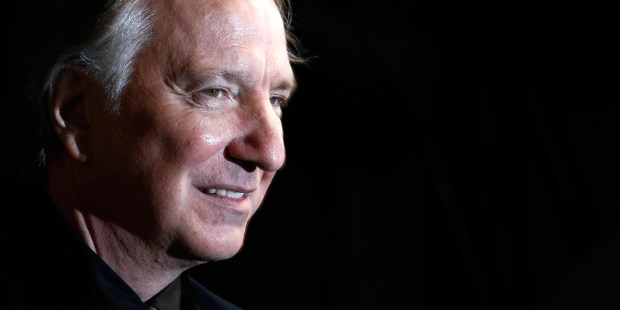 It seems acting can inform faith, as much as faith informs acting

I had always admired my older cousin, Christopher, but that admiration grew when he married an Irish Catholic girl and then converted to Catholicism. Our family wasn’t particularly religious, but I know that his conversion radically changed the path of his whole family, including my second cousin, his daughter, Mairin (a Gaelic form of Maureen).

Mairin Lee is now an actor living in New York City; she recently appeared in Lives of Reason at the Two River Theater in Red Bank, NJ, where she played Ilona. After the death of Alan Rickman was made known, I was taken with a story she shared about him on Facebook:

“When I was 21, I had the most glorious summer at the British American Drama Academy in Oxford. We worked on Shakespeare and Oscar Wilde and Strindberg from morning until night. But one of my favorite moments was when Alan Rickman came to talk with us. Someone asked if he liked playing so many villains. And I’ll never forget how he paused, smiled and said — kindly, deliciously, indelibly — ‘I have never played a villain in my whole career.’”

Mairin went on to say that “it was the perfect way to say that you never judge your character. That’s the job: to make each one real and alive and human; to leave judgment out of it. I remember how the room burst out in laughter. Because it was funny, and because he was right.”

And how loving, and how like Jesus those words are. We assume villainy, but an actor has to find the human being beneath the villain, and perhaps discover the wounds that, unhealed, allow a co-operation with evil, and Christians are called to this as well: to see the person, not the sin.

This is how acting can inform faith, as much as faith informs acting.

“Twelve years of Catholic school prepared me to play the nun Isabella in the off-Broadway play Measure for Measure,” Mairin has joked, and playing that nun kind of dovetailed with Mairin’s thought that acting is a calling from God.

“God would never inspire me with desires which cannot be realized …” St. Therese of Lisieux once said.

As a high school student, Mairin remembers going to a Kairos retreat. A leader told the kids that their own deepest desire is also God’s desire for them. “That notion felt very comforting to me,” she said. “That God was working for me and through me, and he wanted what I wanted for myself and my community. The thing I love about acting and theater, in particular, is that I am offering something valuable, a service. That is important to me.”

Marian Flandrick’s family, which includes Mairin’s, must all have theater in their blood. When she was growing up, her parents took her to performances like “Camelot”. Her first written piece for an audience was when she was in second grade and she wrote a play for the neighborhood kids to put on. They charged admission and people liked the play and she was hooked!