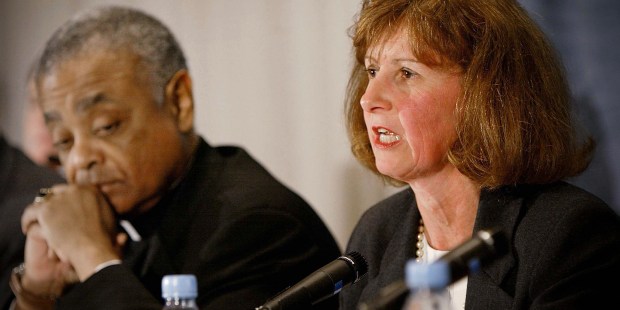 MARK WILSON / GETTY IMAGES NORTH AMERICA / AFP
Kathleen McChesney, head of the U.S. Catholic bishops' watchdog Office of Child and Youth Protection, and Bishop Wilton Gregory present an audit of 195 U.S. dioceses performed to assess compliance with the "Charter for the Protection of Children and Young People," adopted by the Catholic bishops at their meeting in Dallas in June 2002, during a news conference 06 January, 2004, in Washington, DC. Policies in the charter require that all abusive priests be removed, set new guidelines for handling allegations and mandate safe-environment programs to prevent abuse. (Mark Wilson/Getty Images/AFP) FOR NEWSPAPERS AND TV USE ONLY
Share
Print
John Burger - published on 03/08/16

The storyline in the Oscar-winning movie Spotlight ends in January 2002, as the first of many articles on the Archdiocese of Boston’s mishandling of clerical sexual abuse is published, the result of a months-long investigation by The Boston Globe.

In many ways, for the Church in the United States, the work was just beginning.

Kathleen McChesney played a major role in that work, serving as the head of an office for child protection established by the U.S. Catholic Bishops’ Conference. A former executive assistant director of the Federal Bureau of Investigation, McChesney developed and oversaw a national compliance mechanism to ensure that all dioceses complied with civil laws and internal policies concerning the prevention, reporting and response to the sexual abuse of minors. She also coordinated a major research study into the nature and scope of the problem of sexual abuse in the Church.

Now head of Kinsale Management Consulting and co-editor of Sexual Abuse in the Catholic Church: A Decade of Crisis, she spoke with Aleteia about what has been done since 2002 and where the Church needs to go from here.

What has the Catholic Church in the United States done to address the sex abuse problem since the Boston Globe’s expose? What reforms were put into effect, both for clergy and laity?

The two most important things that the U.S. bishops and religious superiors have done to address this problem in the U.S. were to utilize professional survivor advocates to assist persons who are reporting abuse and to ensure they are provided with pastoral care if they desire; and to implement programs to prevent future abuse, including the removal of offenders from ministry.  These programs include abuse-awareness training that has been provided for millions of adults and young people and background checks of  clergy, educators and volunteers.

How effective do those reforms seem to be?

The reforms in the United States, and the efforts of many dioceses and religious institutes initiated before 2002, have been effective in significantly reducing the incidence of abuse.

Just when we thought things were getting better, the Pennsylvania district attorney unveils a damning grand jury report concerning the Diocese of Altoona. Are we back where we started?

The Catholic Church is not “back where it started” in the sense that the number of offenses has been significantly reduced in the past decade and children are safer now in Catholic ministries than ever before. However, civil authorities are more interested than ever before in ensuring that offenders, and those leaders who allowed them to remain ministry, are held accountable for their actions.