What I Saw at the Genocide: Report Details Gruesome Extermination of Mideast Christians 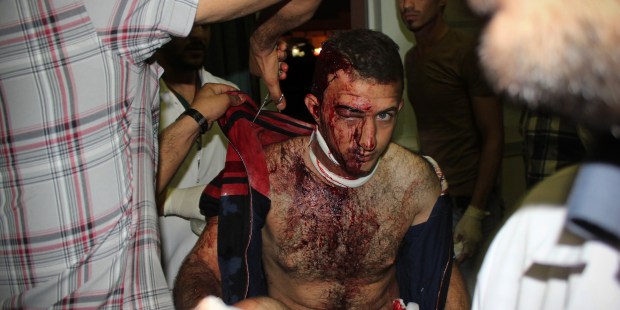 Knights of Columbus, in defense of Christians, submit evidence to State Department

It is time for the United States to “join the rest of the world” in recognizing that Christians are undergoing a genocide in the Middle East.

So says a report submitted to U.S. Secretary of State John Kerry Thursday, urging him to make a declaration that the Islamic State group is carrying out a genocide of Christians.

The European Parliament, German Chancellor Angela Merkel, the U.N. High Commissioner for Human Rights, and the governments of Iraq and the Kurdish Autonomous Region have all labeled ISIS’ actions against Christians genocide, said the report, which was co-authored by the Knights of Columbus and In Defense of Christians. So have Hillary Clinton and the U.S. Commission on International Religious Freedom.

“We are asking that Christians be included in finding of genocide and that a recommendation be made for investigation and, in proper cases, for indictment of those responsible,” the groups says.

Their report documents the murder, injury, enslavement and displacement that Christians have suffered at the hands of the jihadist group.

The report includes a brief laying out the legal basis for a declaration of genocide and details evidence proving that ISIS has the intent of committing genocide. It presents what the groups claim is previously unreported evidence, gathered from a fact-finding mission to Iraq last month.

The legal brief refers to the U.N. Convention on Genocide, in particular, where it says that genocide includes efforts to prevent births within the target group.

“In captivity at the hands of ISIS, husbands and wives are separated for weeks at a time,” the report states. “Christians were often offered freedom at the price of one family member, which usually worked out to be the father. Many among the [internally displaced persons] community have been without husbands or wives for more than a year and a half with no word from them. … ISIS has raped hundreds and more likely thousands of Christian women, either causing permanent damage to reproductive organs or impregnating women with the children of their captors.”

The report was presented at a National Press Club event Thursday in which speakers offered often moving testimony to the ongoing genocide.

“I went to Iraq three weeks ago and met a three-year-old girl whom ISIS members had thrown against a wall. She can no longer talk. Where was her father? He had been murdered, as he was a Christian,” said Juliana Taimoorazy, an Assyrian Christian and president of Iraqi Christian Relief Council. “At the same time I am witnessing the complete elimination of my nation, the Assyrian nation, which is over 7000 years old, one of the first nations to convert to Christianity over 2000 years ago, though the ministry of St. Thomas the Apostle. My language, Aramaic, the language of Jesus, will be erased and no longer heard.”

State Department Spokesman John Kirby said in a statement Thursday that the State Department is “appalled by the horrific acts being committed by Da’esh [ISIS] against people from a wide variety of ethnic and religious groups in Iraq and Syria.”

“‎The United States has been clear that our interest in accountability for perpetrators remains undiminished,” Kirby said. “As Secretary Kerry made clear in recent budget hearings, the Department of State continues to go to great lengths to collect and evaluate all available information regarding Da’esh atrocities, and we remain hard at work on the congressional report that will detail these horrific acts.”

To date, nearly 65,000 Americans have signed a “Stop the Christian Genocide” petition launched by IDC and the Knights of Columbus, urging the State Department to include Christians in its genocide declaration.