Pope Francis: We Are All “Adulterers” Before God (FULL TEXT) 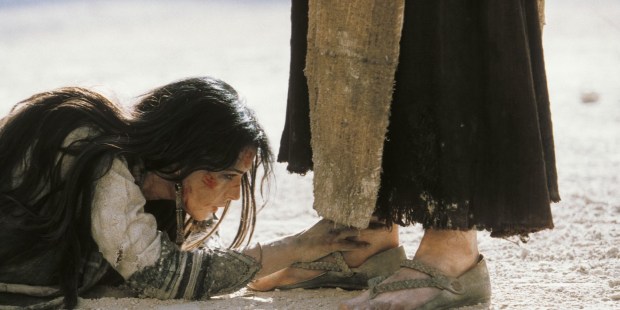 When misery and mercy meet face to face…

Speaking to pilgrims in St. Peter’s Square before the Sunday Angelus, on the third anniversary of his election, the pope commented on the Gospel episode of Jesus’ encounter with the woman taken in adultery (Jn 8:1-11), a passage he said he loves to read and reread often.

The pontiff stressed that, while we are all “adulterers before God” and “betrayers of his love,” what God desires above all is “to liberate us, and he wants us to want this together with Him.” He desires “our freedom to be converted from evil to good” — something, he added, which is possible with His grace.

Here below we publish a translation of Pope Francis’ address.

Good morning. The Gospel on this Fifth Sunday of Lent (cf. John 8:1-11) is so beautiful, and I love to read and reread it. It presents the story of the adulterous woman, and highlights the theme of the mercy of God, who never desires the death of the sinner, but that he be converted and live.

The scene unfolds on the Temple Mount. Imagine it there, on the doorstep of St. Peter’s Basilica. Jesus is teaching the people, and some scribes and Pharisees arrive, dragging before him a woman caught in adultery. The woman finds herself in the middle, between Jesus and the crowd (cf. v. 3), between the mercy of the Son of God and the violence and the rage of her accusers. In reality, they did not come to the Teacher to ask his opinion — there were bad people — but to ensnare him in a trap. In fact, had Jesus followed the severity of the law, approving the stoning of the woman, he would have lost his reputation for gentleness and goodness which so enraptured the people; had he wished to be merciful, he would have gone against the law, which he himself had said he did not want to abolish but to fulfill (cf. Mt 5:17). And Jesus is put into this situation.

This evil intention lay hidden under the question they put to Jesus, “What do you say about her?” (v. 5). Jesus does not answer. He is silent and does something mysterious: “He bent down and wrote with his finger on the ground” (v. 7). Perhaps he was drawing; some say he was writing the sins of the Pharisees … in any case, he was writing, as though he were somewhere else. In this manner, he invites everyone to calm, not to act in haste, and to seek God’s justice. But those bad men insisted and expected an answer from him. They seemed blood-thirsty. Then Jesus looked up and said, “Let him who is without sin among you be the first to throw a stone at her” (v. 7). This response takes the wind out of the accusers, disarming them all, in the true sense of the word: All of them laid down their “weapons,” that is, the stones they were ready to throw, both the visible ones against the woman and the hidden ones against Jesus. And as the Lord continued to write on the ground, to draw, I don’t know …, the accusers went away, one by one, head lowered, beginning with the eldest, who was more keenly aware of not being without sin. How much good it does us to know that we too are sinners! When we speak ill of others — all things we are well acquainted with — what good it would do to have the courage to drop the stones we have to throw at others, and think a little about our own sins.

Only the woman and Jesus remained there: misery and mercy, face to face. And how often this happens to us when we stop before the confessional, with shame, to show our misery and ask forgiveness.

Dear brothers and sisters, that woman represents all of us who are sinners, that is, adulterers before God, betrayers of his fidelity. And her experience represents God’s will for each one of us: Not our condemnation, but our salvation through Jesus. He is the grace that saves us from sin and death. He wrote on the ground, in the dust of which every human being is made (cf. Gen. 2:7), God’s sentence: “I do not desire that you die, but that you live.” God does not nail us to our sins, he does not identify us with the evil we have done. We have a name, and God does not identify this name with the sin we have committed. He desires to liberate us, and he wants us to want this together with Him. He wants our freedom to be converted from evil to good, and this is possible — it is possible! — with his grace.

May the Virgin Mary help us to entrust ourselves completely to the mercy of God, in order to become a new creation.