“Now and at the Hour of Our Death”: Keeping the Faith in “The Walking Dead” 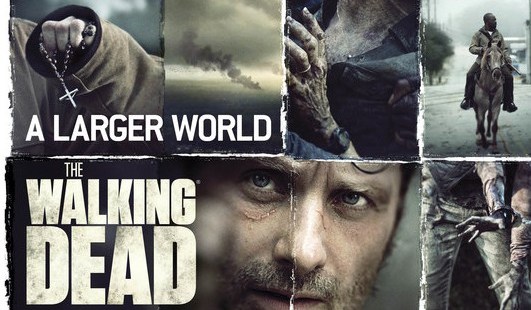 Sunday’s episode, with the rosary, may be the most overtly Catholic use of religion and faith so far

Those of us who are devoted followers of The Walking Dead couldn’t help but be struck by a powerful image and plot device in Sunday’s episode: a rosary, clutched in the fingers of Carol, who must surely have felt the end was near and who really did have a lot to pray about.

I won’t go in to the circumstances surrounding this sudden influx of prayer on the show, but it’s certainly not the first time (and I suspect it won’t be the last) that Christianity, specifically Catholicism, has figured prominently.

There’s the presence of the weak-willed Father Gabriel (an Episcopalian, by the way), whose murky past includes, it seems, allowing most of his congregation to be devoured by the walking dead; there was the tiny statue of the Virgin Mary affixed to the dashboard of a van that went careening off a bridge in Atlanta; and there was the eerie image from the first season, showing dozens of the dead seated inside a church, staring at a crucifix, as if waiting for services to begin.  The current season also features an enigmatic bearded character named Jesus, along with a pack of dangerous killers called “The Saviors.”

But Sunday’s episode, with the rosary, may be the most overtly Catholic use of religion and faith so far. Notably, it helped save characters in peril — although the outcome was, characteristically, bloody and horrifying. But that rosary was something actress Melissa McBride discussed during the post-show Talking Dead interview, and also with The Hollywood Reporter:

At the end of this episode, Carol is clinging so tightly to the rosary beads that her hand is bleeding. Is there part of her that is turning to religion to help cope with the things she’s had to do in this world?

I love that about this episode. It does raise a lot of questions, because the line is between what is the real Carol is and what is the ruse. There was a line there when Paula says, “Do you really believe in that crap?” and Carol looks up to her, with tears in her eyes, and says, “My faith got me through the death of my daughter [Sophia].” I think those were tears of regret because that’s when she lost her faith. So there may be something to this. There’s so much beautiful symbolism with that rosary showing up when it did and how it did — that she could use it to help her escape in more ways than one, perhaps. But is there a part of her that is repenting? Was that a Hail Mary? Now is it the hour of her death? It asks more questions than it answers in that way. But there is more story to be told.

While I don’t think the subject has ever come up in interviews, I wouldn’t be surprised if the show’s executive producer, Greg Nicotero, has Catholic roots. (How many people do you know named Gregory who aren’t Catholic?)  He grew up in Pittsburgh before becoming a makeup and special effects artist. Beyond that, he hasn’t spoken much about his upbringing.

Wherever they come from, notions of faith and doubt, belief and unbelief, death and resurrection are recurrent subtexts in the show. During the second season, the haunted farmer Herschel was seen frequently reading his Bible, once noting dryly: “I can’t profess to understand God’s plan. Christ promised the resurrection of the dead. I just thought he had something a little different in mind.”

Maybe the creators of The Walking Dead have something different in mind too — a show that takes religion and a search for meaning seriously, even during a zombie apocalypse, when some might think life has become meaningless.

What may be most intriguing, though, is that with shows like Damien and Lucifer earnestly giving the devil his due, a show like The Walking Dead manages to treat religion with sobriety and a degree of respect. For all the despair and desolation of a post-apocalyptic world, in which people are literally tearing each other apart, the show sees faith as an essential element of hope. In today’s blighted television landscape, that’s no small thing.

It remains to be seen where The Walking Dead takes these characters and their religious inclinations. But it seems clear that even after the dead have risen, the living still have a prayer.