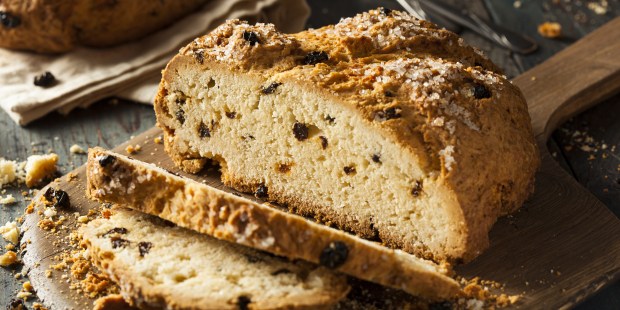 Even St. Patrick might have been tempted to overstay his welcome for a piece of this

It seems everybody’s Irish on St. Patrick’s Day. Grocery stores sell out of corned beef, and pubs are crawling with patrons drinking Guinness and forking down celebratory dishes like shepherd’s pie. But the most popular, and one of the oldest traditional foods out of the Emerald Isle, may be Irish soda bread.

Like many traditional breads from around the world, Irish soda bread is made with the most basic ingredients: flour, salt, soured milk and baking soda. It’s customary to carve the shape of a cross with a knife across the top before baking, and in Ireland the bread was shaped differently depending on the region — in the south it was a round loaf, and in the north it was more of a flat rounded disk cut into four equal triangle shapes. The bread is usually served with a meal, rather than eaten as a dessert, but in North America it is most popular as a breakfast food, or something to enjoy with coffee or tea in the mid-morning or afternoon.

While you can find Irish soda bread in many bakeries and grocery stores, it’s easy to make, and Aleteia English’s editor-in-chief, Elizabeth Scalia, claims to have the best Irish soda bread recipe ever, and blogger Deacon Greg Kandra claims it is true!

Scalia calls Irish soda bread “a delicious butter-delivery system” and is happy to share her mother-in-law’s famous recipe with Aleteia readers. (Her Italian mother-in-law, mind you.) So grab your pint of Guinness or a cup of Irish Breakfast tea and pull out your measuring cups.

Directions: Preheat oven to 350F. In large bowl, mix dry ingredients together. In separate bowl, mix butter, eggs and buttermilk. Stir wet ingredients into the dry. Fold in raisins or cranberries. Form into round shape and carve a cross on the top. Place in a 2 quart pan (like a Pyrex) because it works the best. Bake for 1.25 hours.

Note: If you use coconut palm sugar, a reportedly healthier sweetener than white sugar, you will get the same degree of sweetness, but the bread will be browner.

As you place the bread in in the oven, or as a grace just before eating it, pray the prayer of St. Patrick: