Mercy at the Bus Depot 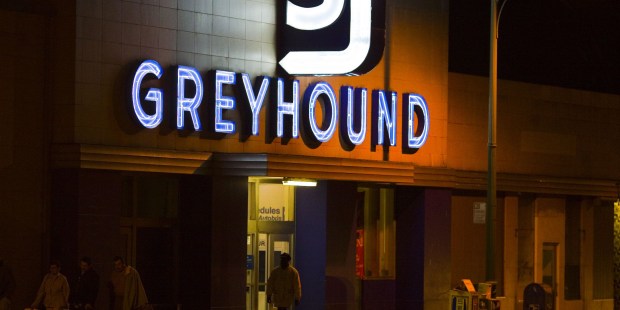 God chases after us and welcomes us, even when we’re toting the trash bags filled with the things we’re really about

His father caught sight of him and was filled with compassion. He ran to his son, embraced him and kissed him.—Luke 15:20

For years the image I kept in my head from the Parable of the Prodigal Son was of this benevolent, rich father, wearing a beard and fancy robe, embracing a son who looked something like a fraternity boy after a weekend of hard partying.

That image got upended some five years ago by a tattooed teenaged girl I encountered at the Gastonia city transit terminal. It was a hot October afternoon, and I had arrived early to meet our son’s caregiver, hoping to pray and watch the sunset. I had just opened the Divine Office app on my iPhone when I spotted her at the end of a bench.

The tattoos or eyeliner or “goth” haircut didn’t seem as unusual as the trenchcoat. She had it buttoned-up despite the 80-degree heat. Seriously tough girl, I thought, as I counted the piercings on her face. Seriously scared girl, I realized, after I saw her eyes.

“Can I use your cell phone?” she asked.

She explained she’d spent 17 hours on buses from Ohio. She was making a short-notice visit to grandparents who’d moved back to town to start a business. It hadn’t gone well, and they were broke.

“And you’re coming here why?” I wanted to ask. A plastic trash bag at her side — filled with all her belongings — told me she had nowhere else to go.

I was three months from ordination. I wanted to do something. Get her a meal. Tell her how much God loves her, proclaim the Gospel. I bowed to the stronger impulse to shut up. The girl and her trash bag made their way to the parking lot. I started Google-searching for homeless shelters.

Five minutes later a gray Delta 88 sputtered up Main Avenue, going just five mph. Good thing because Grandma didn’t wait for the car to stop before exiting and running to embrace the girl.

“I’m sorry” — “No, I’m sorry” filled the air. I glanced over to see the girl whispering in Grandma’s ear and Grandma, stepping back, bug-eyed, as the girl slowly unbuttoned the trenchcoat.

Out came a baby bump. The look on Grandma’s face made me think she was going to turn and run. I thought I’d have to give the girl a ride to a shelter or obstetrician. Maybe I’d proclaim the Gospel.

Grandma didn’t run. Grandma knelt, wrapped her arms around that belly and kissed it.

The Gospel got proclaimed.

When we say God loves us, it’s not the spit-shined, have-it-all-together version of ourselves that God loves. God see those places in our lives, those circumstances, those consequences that we’d rather hide but embraces us anyway.

Just as surely as the father in the parable embraced the party-boy son. Just as surely as Grandma embraced her granddaughter — who made the gutsy and moral choice of carrying her child but kept her condition tucked away under that trench coat.

God chases after us and welcomes us, no matter whether we come to God toting the designer luggage filled with the things we think God expects from us.

God chases after us and welcomes us, even when we’re toting the trash bags filled with the things we’re really about. The stuff we had to pack in a hurry, the stuff we didn’t have time to fold or wash.

The forgiveness that God gives us in Jesus does come with a real forgetfulness. The slate does get wiped clean, our Scriptures tell us. Our sins are remembered no more.