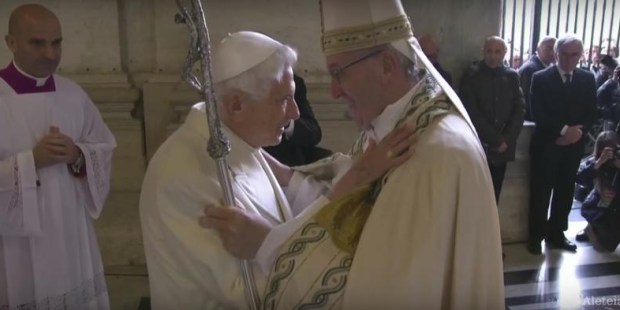 “Only where there is mercy does cruelty end, only with mercy do evil and violence end.”

The Christian Faith Is Not An Idea But A Life

(Full text of a recent interview with Emeritus Pope Benedict XVI, translated by Robert Moynihan at Inside the Vatican, and reprinted here with permission)

We publish here the full text of the interview with Benedict XVI in the book, Through Faith: Doctrine of Justification and Experience of God in the Preaching of the Church and the Spiritual Exercises by Jesuit Fr. Daniel Libanori (Cinisello Balsamo, Edizioni San Paolo, 2016, 208 pages, € 20) in which the retired Pope speaks of the centrality of compassion in the Christian faith. The volume contains the proceedings of a conference that took place last October in Rome.

As noted by Filippo Rizzi of Avvenire on March 16, who published excerpts from the interview, the conductor of the interview (whose name does not appear in the book) was the Jesuit Jacques Servais, a student of Hans Urs von Balthasar and scholar of his works.

*****
Fr. Jacques Servais, S.J.: Your Holiness, the question posed this year as part of the study days promoted by the rectory of the Gesu (the residence for Jesuit seminarians in Rome) is that of justification by faith. The last volume of your collected works highlights your resolute affirmation: “The Christian faith is not an idea, but a life.” Commenting on the famous Pauline affirmation in Romans 3:28, you mentioned, in this regard, a twofold transcendence: “Faith is a gift to the believers communicated through the community, which for its part is the result of God’s gift” (“Glaube ist Gabe durch die Gemeinschaft; die sich selbst gegeben wird ‘, gs iv, 512). Could you explain what you meant by that statement, taking into account of course the fact that the aim of these days of study is to clarify the pastoral theology and vivify the spiritual experience of the faithful?

Emeritus Pope Benedict XVI: The question concerns what faith is and how one comes to believe.

On the one hand, faith is a profoundly personal contact with God, that touches me in my innermost being and places me in front of the living God in absolute immediacy in such a way that I can speak with Him, love Him and enter into communion with Him.

But at the same time this reality which is so fundamentally personal also has inseparably to do with the community. It is an essential part of faith that I be introduced into the “we” of the sons and daughters of God, into the pilgrim community of brothers and sisters.

The encounter with God means also, at the same time, that I myself become open, torn from my closed solitude and received into the living community of the Church.

That living community is also a mediator of my encounter with God, though that encounter touches my heart in an entirely personal way. Faith comes from hearing (fides ex auditu), St. Paul teaches us.
Listening in turn always implies a partner.

Faith is not a product of reflection, nor is it even an attempt to penetrate the depths of my own being.
Both of these things may be present, but they remain insufficient without the “listening” through which God, from without, from a story He himself created, challenges me.

In order for me to believe, I need witnesses who have met God and make Him accessible to me.
In my article on baptism I spoke of the double transcendence of the community, in this way causing to emerge once again an important element: the faith community does not create itself.

It is not an assembly of men who have some ideas in common and who decide to work for the spread of such ideas. Then everything would be based on its own decision and, in the final analysis, on the majority vote principle, that is, in the end it would be based on human opinion.

A Church built in this way cannot be, for me, the guarantor of eternal life nor require decisions from me that make me suffer and are contrary to my desires.

No, the Church is not self-made, she was created by God and she is continuously formed by him.

This finds expression in the sacraments, above all in that of baptism: I enter into the Church not by a bureaucratic act, but through the sacrament.

And this is to say that I am welcomed into a community that did not originate in itself and is projected beyond itself. The ministry that aims to form the spiritual experience of the faithful must proceed from these fundamental givens.

It is necessary to abandon the idea of ​​a Church which produces herself and to make clear that the Church becomes a community in the communion of the body of Christ. The Church must introduce the individual Christian into an encounter with Jesus Christ and bring Christians into His presence in the sacrament.