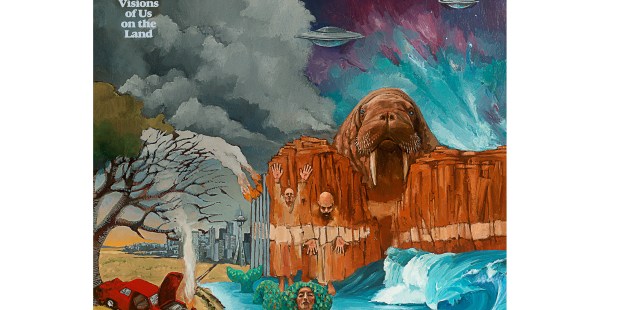 Damien Jurado’s intimate 2012 album, Maraqopa, and its 2014 sequel, Brothers and Sisters of the Eternal Son, gave us as broad a range of moods as music has to offer, from the drowsy and melancholic to the fevered and ecstatic. But the albums both revolved around a single narrative, one of a man who journeys out into the wilderness to discover his true identity. “It is about a guy who disappears on a search, if you will, for himself,” Jurado explains. “And never goes home.”

Jurado, a Christian, has been candid about the spiritual contours of his protagonist’s quest – there are references to original sin (“Life Away from the Garden”), resurrection (“Jericho Road”) and redemption (“All for You”) – but the ambiguous lyrics and experimental sound will send most listeners of “contemporary Christian music” running for the exit. This is no saccharine, shrink-wrapped confession of faith; Maraqopa represents a dizzying, sometimes perilous landscape, where nothing human is alien.

Visions of Us on the Land, the third installment of Jurado’s trilogy, offers at once the darkest and the brightest spots of that journey. The subtle tensions of Maraqopa, which gave way to the wild, open spaces of Brothers and Sisters, now arrive at a dark, psychedelic climax dominated by minor chords and howling vocals.

The opening three songs make you wonder where Jurado is leading us – or if he even knows. The thudding guitar strums of “November 20” and the eerie synths of “Qachina” – with “Mellow Blue Polka Dot” gesturing back to “Silver Timothy” in-between – set the stage for the unnerving final chapter of the search. “I met myself there,” Jurado sings on “Qachina,” “saying go home.” An accompanying video gives us a surreal array of swirling, shadowy vantage points and a narrative with no beginning or end – a kind of “heap of broken images.”

Aside from a few bright moments – e.g., the gentle, acoustic “Prisms,” or the playful funk of “Walrus” – this eeriness defines the first two thirds of Visions. “Sam and Davy,” which sounds like something from the mind of Daniel Johnston, juxtaposes a peaceful setting with a very un-peaceful feeling. “Me and my boy Sam,” Jurado moans, “in the tall, tall grass, on our backs in the heat of the sun on a warm October.” What on paper reads like a carefree song might actually be the tensest moment on all three albums, one that culminates in a glimpse of some unnamable darkness: “Does your blood run cold? Or your eyes go white? On a borrowed soul, on a borrowed time?” Jurado draws this theme forward with “Onalaska,” again using a placid setting (“I’ve been in the desert, spent time on a mountain, off of my feet floating in suspension”) to extract a growing sense of isolation. “Don’t say you ever knew me long after I’m gone,” he sings in the chorus. “Don’t say you ever knew me.”

It’s only with “On the Land Blues” – which Jurado lent to the soundtrack of the movie Tumbledown – that the tide begins to turn. “Jesus on the mainline,” Jurado sang on “Lon Bella,” referencing an old Gospel song – and here he picks up and answers, without seeming to know how or why. “Lord, take the weight,” he calls out, “I won’t need it. Salvation’s pain, glory be. Follow me down on this road …”

That change in the album’s center of gravity – from chaos to order, from darkness to light – leads to “Exit 353,” a turnoff at the end of the journey. “Cinco de Tomorrow” and “And Loraine”, two breezy, salty-aired throwbacks to 60s sunshine pop, give way to an ’80s synth and the washed-out levity of “A.M. AM.” “It was you all along,” Jurado sings, suddenly without a care in the world. “I was yours all along.”

Three intimate, Dylan-esque acoustic numbers bring things to a close, with some customary lines about memory and the passing of time. But the real power and paradox of the last six songs is that the singer’s epic journey to find himself culminates in the simplest thing of all: giving himself up. Jurado really shines here not just as a singer-songwriter, but as a storyteller: his character travels miles and miles, mired in the endless jungle of self-searching – but it’s only when he breaks out of that world to live for another that he finally makes sense of his life.

“When I look back upon my time, see the snapshots of my life,” Jurado sings – and you can almost see him lying in the sand at the farthest edge of his Maraqopa, looking out at the vast ocean, battered, exhausted, and completely happy – “you will not be surprised to see your name across my smile.”