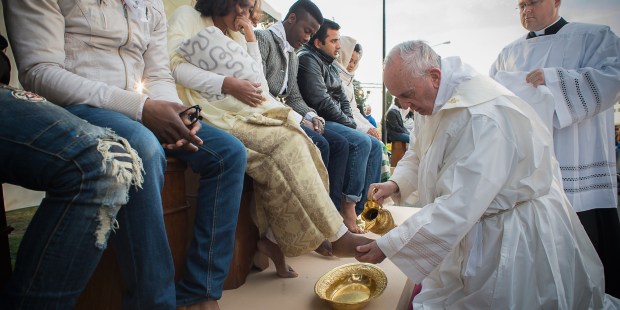 AFP PHOTO / OSSERVATORE ROMANO
In this handout picture released by the Vatican Press Office, Pope Francis performs the foot-washing ritual at the Castelnuovo di Porto refugees center near Rome on March 24, 2016. Pope Francis washed the feet of 11 young asylum seekers and a worker at their reception centre to highlight the need for the international community to provide shelter to refugees.

Several of the asylum seekers, one holding a baby in her arms, were reduced to tears as the 79-year-old pontiff kneeled before them, pouring water over their feet, drying them with a towel and bending to kiss them. / AFP / STR / RESTRICTED TO EDITORIAL USE - MANDATORY CREDIT "AFP PHOTO / OSSERVATORE ROMANO" - NO MARKETING NO ADVERTISING CAMPAIGNS - DISTRIBUTED AS A SERVICE TO CLIENTS
Share
Print
John Burger - published on 03/24/16

Three days after the terrorist bombings in Brussels that killed 31 people, Pope Francis brought together 12 refugees of different faiths and places of origin, telling them that they were taking part in a “gesture of brotherhood.”

Muslims from Syria, Pakistan and Mali, an Indian Hindu, Catholics from Nigeria and Coptic Christians from Eritrea made up the group of 12 persons to have their feet washed by the pope during the Holy Thursday Mass of the Lord’s Supper.

The Vatican said the gesture was meant to focus attention on marginalized members of society. In previous years, Pope Francis has invited prisoners, the elderly and disabled persons to take part in the ceremony, known as the Mandatum.

The pope celebrated the outdoor Mass at the Center for Asylum Seekers (Centro di Accoglienza per Richiedenti Asilo, or CARA), a temporary welcome and living facility located on the outskirts of Rome. The center currently houses about 900 asylum seekers from 25 countries in Africa, Asia, and Europe. The majority of the guests at the facility are Muslim, and there are many Protestants and Coptic Christians as well.

The group of refugees whose feet were ritually washed by the pope included men and women. In January, Francis issued In Missa in Cena Domini, a decree stating that “pastors may select a small group of the faithful to represent the variety and the unity of each part of the people of God” and that “such small groups can be made up of men and women.”

The Vatican said Thursday that four women and eight men took part in the refugee center Mandatum. The women included an Italian Catholic who works at the center and three Eritrean Coptic Christian migrants.

Several of the migrants wept as Francis knelt before them, poured holy water from a brass pitcher over their feet, wiped them clean and kissed them, the Associated Press reported. The news service said that Francis greeted each refugee in attendance, posing for “selfies” and accepting notes as he moved down the rows.

Here are remarks made by the Pope prior to the ceremony. This is an English language working translation e-mailed by one of the Vatican’s spokesmen, Father Thomas Rosica.

The gestures speak louder than pictures and words. The gestures. … There are, in the Word of God that we read, two gestures: Jesus serving, washing the feet … he, who was the “head,” washing the feet of others; they were his own, even the smallest of them all. A gesture.

The second gesture: Judas, who goes with the enemies of Jesus, to those who do not want peace with Jesus, to take the money with which they betrayed him, the 30 pieces of silver. Two gestures. Even today, here, there are two gestures: the first, all of us together: Muslims, Hindus, Catholics, Copts, Evangelicals but all brothers and children of the same God: we want to live together in peace. One gesture.

Three days ago, an act of war, of destruction in a European city, by people who do not want to live in peace. But behind that gesture, just as behind Judas, there were others. Behind Judas there were those who gave the money so that Jesus would be handed over. Behind that gesture, there are manufacturers, arms dealers who want blood, not peace; they want war, not brotherhood.

Two gestures, the same: Jesus washes the feet;  Judas sold Jesus for money. You, we, all together, different religions, different cultures, but children of the same Father, brothers. And there, those poor people who buy weapons to destroy brotherhood.

Today, at this moment, when I will perform the same action of Jesus washing the feet of 12 of you, all of us are performing a gesture of brotherhood, and we all say: “We are different, we are different, we have different cultures and religions, but we are brothers, and we want to live in peace.” And this is the gesture that I perform with you. Each of us has a story within us. So many crosses, so many sorrows, but we also have a heart open to brotherhood.

May each one of us in our own religious language, beg the Lord that this brotherhood be contagious in the world, so that there are not 30 coins to kill our brother, so that there will always be brotherhood and goodness. So be it.

All photos are from CTV Centro Televisivo Vaticano.