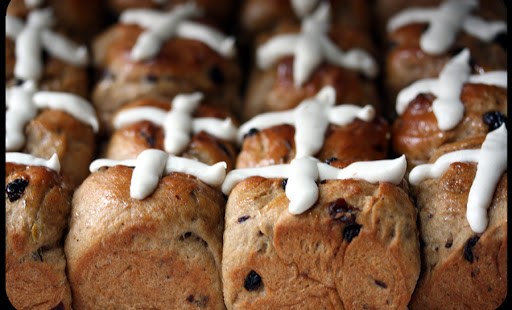 But aren’t we supposed to be fasting?

The history of the hot cross bun, traditionally served on Good Friday, is quite interesting and goes back farther than you might think (for a recipe see “Hot Cross Buns for Good Friday” by Jessica at Catholic Cuisine).

Since most hot cross buns are scored with a cross on the top (to symbolize Christ’s suffering and crucifixion) and then drizzled with icing, I began to wonder about the use of a sweet icing on the top of the hot cross bun. A sweet on Good Friday, traditionally a day of fasting and abstinence as we contemplate the depth of suffering Our Lord endured for our sins, seemed incongruous. This prompted me to look up a little more history on the tradition and custom of the hot cross bun.

From Fr. Francis Weiser in Handbook of Christian Feasts and Customs :

It was a universal custom (and still is in Catholic countries) to mark a new loaf of break with the sign of the cross before cutting it, in order to bless it and thank God for it. On special occasions the cross was imprinted on the loaf before baking, as on the Christmas loaves in southern France and in Greece, the Kreuzstollen (cross loaf) in Germany, the cross bread of Mid-Lent among the Slavs.

On Good Friday, loaves bearing an imprinted cross (Karfreitaglaib) are eaten in Austria. In England, from the end of the 14th century, buns were baked with a cross marked on them [emphasis added]. They are said to have originated at St. Alban’s Abbey in 1361, where the monks distributed them to the poor. Whatever their origin, these hot cross buns became a famous Good Friday feature in England and Ireland, and later in this country. They were made of spiced dough, round in shape, with a cross made of icing on the top. In recent times these cross buns are sold not only on Good Friday but all through Lent.

I find it difficult to believe that devout Christians of the time, those in Ireland who often observed a Black Fast (taking only water or tea during the day) on Good Friday, would break the fast to eat a bun with icing. But I could be wrong. It seems more plausible that the hot cross bun would be marked with the cross before baking as those from St. Alban’s Abbey were.

Interestingly, an entry at the Food Timeline seems to suggest that the cross was originally scored in the top of the bun with a knife and that the pastry or icing cross was a modern decorative feature, as Jessica alluded to.

Many quibble over the date of their origin — they are first mentioned by name as hot cross buns in Poor Robin’s Amanac in 1773. Most agree that they predate this mention. They were popular in Tudor days, as there are specific mentions of their being permitted to be baked under certain conditions by Queen Elizabeth I in 1592.

But perhaps most fascinating is this mention taken from Sue Ellen Thompson’s Holiday Symbols and Customs: “When archaeologists excavated the ancient city of Herculaneum in southwestern Italy, which had been buried under volcanic ash and lava since 79 CE, they found two small loaves, each with a cross on it, among the ruins.”

It is so interesting to dig into the rich history and traditions of our faith! Whether your hot cross buns are adorned with an icing cross, scored with a cross or store bought, I pray your Good Friday is blessed with adoration and deep reflection of Our Lord’s passion and crucifixion.

Jennifer Mackintosh is a Catholic home educator and a mom of five who finds life full of very joyfully ordinary moments. She writes and shares about family experiences, home education, living the Catholic faith, organizing and planning for the home and home education, and the splendor found in their very ordinary days at her blog: www.wildflowersandmarbles.com. This article originally appeared on Catholic Cuisine and is reprinted here with the author’s permission.