How Holy Saturday Gives Us a Taste of Christ’s Longing 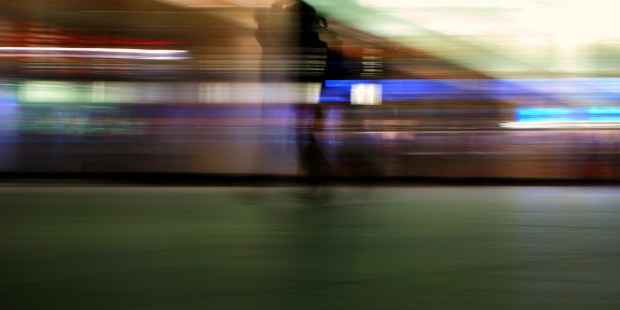 God reaches out to us and we walk by. Today, with no Mass and the absence of the Lord so keenly felt, we reach out to him …

A couple of years ago I had some business to attend to in New York City during Holy Week.

It had been a difficult Lent; some days I was trying too hard, other days I was phoning it in, and in terms of fruitfulness, the branches were pretty bare. I knew it was my own fault.

The business in Manhattan was neither fulfilling nor satisfying, and as I ambled into Penn Station, my interior dialogue was grumpy; I groused about my own failures as a human being, the fecklessness of other human beings and my general dissatisfaction with the state of the world.

In that less-than-saintly mood — my default state — I decided I would await my train with a Guinness in my paw, nursing it along with all of my grudges.

Settled with an Irish stout, then, my position at the bar allowed me to see the schedule boards I needed for my train and also afforded me a full view of the escalators pulling people off the streets, and a cross-section of folks coming and going. The perspective was a people-watcher’s dream.

I had barely touched my beer and was vaguely agreeing with the man at the next stool that the Talking Heads was a great ’80s band when, for the merest moment, something happened.

For just the briefest instant, it seemed as though everything simply stopped; a full-on freeze frame.

The people walking by, the escalators full of people floating up or down, the groups gathering by the schedule board, the music and conversation around me — it all seemed to simply stop.

And in the space of a pulse — with the same sort of fleeting beat of affirmation that characterizes a pulse — I understood something in an instinctive and internal way that I cannot yet perfectly or even adequately describe.

I wouldn’t presume to say that anything was being communicated to me, but I nevertheless had a glimpse — or an overwhelming “sense” — of something. In that brief flash I knew that hovering over us, near us, within us, all about us was an awful, unstoppable ache of love and sadness; a sense of “Oh, my people! How often I have wanted to gather your children together as a hen protects her chicks beneath her wings, but you wouldn’t let me.”

This ache of longing, reaching out; of longing unanswered, unfulfilled.

It lasted the merest second, and then all was normal; everyone was moving; the radio was blaring. But for the rest of that Holy Week, nothing felt right to me. I was weepy and restless, and everything seemed unsuitable.

You see, this was not like Thomas Merton’s moment in Kentucky, and the joy-filled sense he had of people gadding about, shining like the sun. This felt more like a gloaming; like the space between dark and light that, of an ordinary twilight vespers, can bring such a sense of comfort and completion. And yet, this moment contained a note of what I can only characterize as desolation. Unfulfilled belonging.

There is a story about Blessed John Paul II, that he was once discovered in his private chapel with his arms about the tabernacle, crooning a song in Polish, as a mother might croon to a child. He looked up to his visitors with a distraught expression and said, “I don’t know how to comfort him!”

That is precisely what it felt like to me — as though I had one of my children in my arms, and he was inconsolable.