Mother Angelica Helped Me See the Church “With New Eyes …” 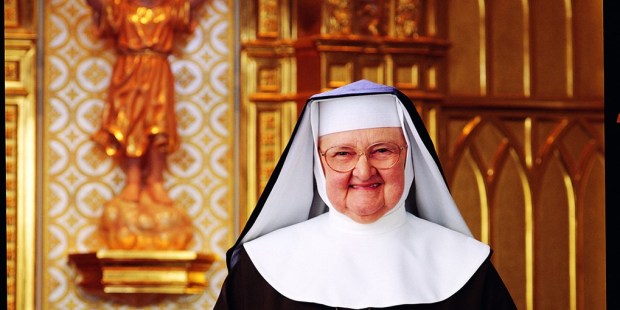 “Life has not ended, it has only changed.”

From the first encounter with her, Mother Angelica seemed always and everywhere to be invincible. She met so many monumental challenges throughout her long life and seemingly overcame them all even when it required her to surrender to physical weakness and utter dependence. Even in that she continued to teach as she did for decades that true faith and discipleship means “all in” Catholicism, Christianity, sharing in the suffering of Christ for humanity. It sounded so much more delightful and exciting when she spoke to you directly through the camera lens, at times with deep gravity, at times with great wit and spontaneous bursts of laughter at some silliness that erupted in the middle of her unscripted monologues wrapped around lessons from the Gospels. It became more serious and weighty when her witness to the grace and power of abandonment came from beyond cameras’ reach, in her cloistered convent, when she was rendered powerless and speechless by physical affliction.

But her basic, pervasive message was “Jesus. Loves. You.” It was the subtext of every lesson she taught. Thankfully, they will live on ad infinitum, or as long as television and radio signals air on this planet, and so Mother’s voice and her message will remain timeless. Thank God she took the first step on an uncharted course of putting a television signal up from a garage in Alabama that broadcast The Eternal Word, for the sake of whomever the signal reached.

It reached me many years later, while searching channels for something, anything suitable to the moment. It was the Mass I first saw there and knew that channel was good. This happened at about the time I stumbled into a major reversion to the faith I never thought I left but failed to know or practice well (if at all, for a while). Much like the man at the beginning of Chesterton’s Orthodoxy who set off on a journey by boat, landed on a shore and discovered an exciting new landscape there, only to learn it was the very place where he had started, his homeland, something he saw with new eyes.

With new eyes I saw the Catholic faith through Mother Angelica’s EWTN, and I absorbed its programming, watching and listening as it stayed on in the background on a table top television most of the time, for a very long time, as my personal comforting but challenging companion, spiritual guide and intellectual mentor. The books discussed at length, the films shown from the great classics, the series re-aired from Archbishop Fulton Sheen and new ones on G. K. Chesterton, courses on faith and reason, science and history, ethics and philosophy, provided a crash course in “the life of the mind” and “the truth about everything.” I couldn’t get enough, for years. Still. It is the “beauty ever ancient, ever new” of which Augustine wrote.

And he, the great Augustine, can be found, regularly, on EWTN, cited and quoted and taught.

The presence of the foundress of this divinely inspired network — the truest manifestation of the word network — has always been and will always remain the heart of it all. And I, just one of millions of souls touched and changed by the life, vocation and mission of Mother Angelica, will be eternally grateful.