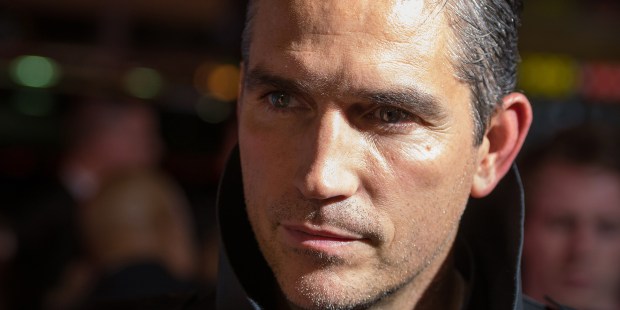 When Jim Caviezel was young, he had to stay home to study Spanish while his family went to see John Paul II during his visit to Vancouver, British Colombia. He missed out on that chance to see the pope. But 20 years later, having a well-established career in the cinema and having earned the right to play the role of Jesus of Nazareth in Mel Gibson’s The Passion of the Christ, he got a second chance.

There are two parts to his meeting with John Paul II, which Caviezel recounted on separate occasions. One is serious; the other hilarious. Together with his wife and in-laws, he had the chance to greet and converse with the pontiff — who has since been canonized — for five minutes in 2004, around the time of year the movie premiered. The first thing Caviezel did was thank him for his jubilee letter to artists, which had had a profound impact on the actor. He also thanked the pope for the importance he gave to the Virgin Mary in his pontificate.

But he also shared with the pontiff how he had prepared to play the role of Jesus in The Passion, in response to a question from the pope. On the Larry King Live program, the day before the Polish pope’s death, Caviezel recounted that when the pope asked him how he had prepared to play the part of Jesus, Caviezel nervously answered that he had been hanging out with Italians … and he said, “I think Jesus was Italian.”

In response to the pope’s surprise, the actor continued: “He didn’t leave home until he was 30. He always hung out with the same 12 guys, and his mother believed he was God, so he had to be — you know, he had to be Italian.”

With a straight face, John Paul II answered, “That was witty. He was Polish.”

In those interviews with Larry King, which took place on April 1 and 3, 2005, Caviezel, who is Catholic, remembered how John Paul II was important for his development as an actor, even in order to convince his father that acting was his vocation. His father only agreed to support his decision to be an actor when Caviezel informed him that Wojtyła himself had been an actor.

Caviezel also explained that the magisterium of John Paul II was like training for him. “My acting is based in truth. And everything I read about the Holy Father — in his letter to the actors, he talked about truth. And there is good and there is evil. And it’s important not to make good look like evil or evil look good. Just call it as it is. And that’s my training. And I think, when he spoke to people, he spoke to their hearts. And whether you’re speaking in front of a million or you’re acting with another actor, you’re still speaking from your heart. And this is the kind of training that I think [John Paul II] came from.”

“In Christ, God has reconciled the world to himself. All believers are called to bear witness to this; but it is up to you, men and women who have given your lives to art, to declare with all the wealth of your ingenuity that in Christ the world is redeemed,” wrote John Paul II in his letter to artists.

Caviezel had the chance to express this firmly held belief of John Paul II explicitly in The Passion of the Christ, a staple of television programming during these days of Holy Week.

Translated from the Spanish by Matthew Green.