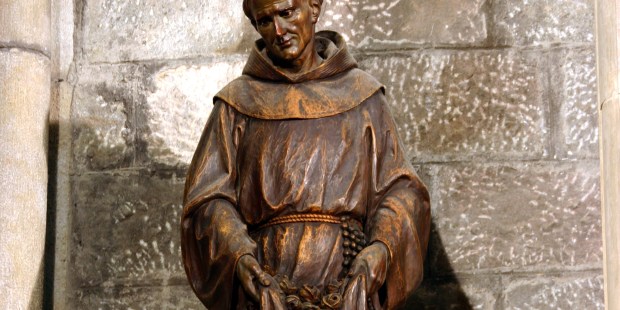 He welcomed the poor and the sick both physically and spiritually

Do you remember when Pope Francis spoke of the Church as a field hospital for sinners? In a September 2013 interview, which was published in Jesuit publications worldwide, the Holy Father said:

“I see the Church as a field hospital after battle. It is useless to ask a seriously injured person if he has high cholesterol and about the level of his blood sugars! You have to heal his wounds. Then we can talk about everything else. Heal the wounds, heal the wounds. … And you have to start from the ground up.”

That came to mind again today when I read this message from St. Peter Regelado, who is remembered on this date.

“And let all the brothers, both the ministers and servants as well as the others take care not to be disturbed or angered at the sin or the evil of another, because the devil wishes to destroy many through the fault of one; but they should spiritually help [the brother] who has sinned as best they can, because it is not the healthy who are in need of the physician, but those who are sick.” (cf. Matt. 9:12; Mark 2:17) (Rule of 1221, Chapter 5)

Peter Regelado was born to a wealthy family but lost his father at a young age. He was extremely pious, even in childhood, so he was permitted to enter the Conventual Franciscans when he was only 13. His devotion was apparent: he kept almost continuous silence, and he prayed through most of the night. When he attended Mass, he was so moved that he frequently cried from love. He wanted to share in the sufferings of Christ, so often scourged his own body — even drawing blood. He frequently fasted on bread and water.

St. Peter Regelado was generous toward his fellow men, and he often welcomed the poor and the sick into the monastery with him, caring for their needs with no thought of his own comforts.

Peter died on March 31, 1456, and his gravesite quickly became a popular pilgrimage destination.

St. Peter, you were generous toward those in need, either physically or spiritually. Help us, like you, to regard our brother with love and not with anger, even when we disagree. Please pray for us to the Divine Physician, whose steadying hand will guide us toward our eternal reward.

Kathy Schiffer is a freelance writer and speaker who writes about faith and culture at her blog, Seasons of Grace.