Sometimes the Tabernacle Is Hidden 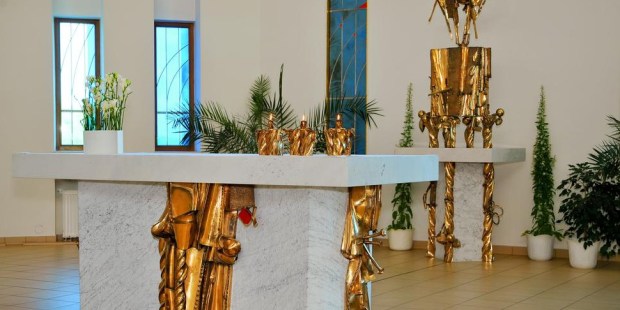 Lessons after 15 years as a Catholic

I like to be pointing in the right direction when I revere the Son of God, but some churches hide the Tabernacle. Maybe you have done this too: You begin to genuflect and then see a blank wall or a big chair behind the altar, but no Jesus. With your right knee bent at a 90-degree angle and your feet almost on a line, you swivel your head quickly to left and right looking for the Tabernacle, and the motion throws you to one side.

In the best case you hit the side of the pew. In the worst you topple over into the aisle. In front of other people, some of whom will jump up to help you when you’d like to scoot into the pew and pretend it never happened. I have done both.

What I’d Want to Pass On

The Easter Vigil was my and my family’s 15th anniversary of entering the Church. I’ve tried to think what I’ve learned in those years, what I’d want to pass on to new Catholics and share with those wondering whether to join, and I’ve come up with this: sometimes the Tabernacle is hidden, but you can always find it.

Thanks to a sociological bent of mind, I was blessed to have a more realistic view of what life in the Catholic Church is like than many converts. Something so old, so big, so complex, so subject to all the world’s temptations is going to be flagrantly imperfect. Once God created the Church as he did, in 2016 she was going to look pretty much the way she does. If someone wants to complain, they can take it up with him.

I liked the idealism of “God writes straight with crooked lines.” I loved the way the Church absorbed so many cultures and traditions and didn’t expend its energy drawing lines and patrolling the borders. Even the scandals Protestant friends always brought up, like the mafia dons — the godfathers being godfathers — showed how generously the Church threw open her doors. Maybe she threw them open too wide, but better that than the barricaded doors with the tiny sliding window like the doors in a movie speakeasy.

Yet scandals could still depress me. Years after the stories of abusive priests first shamed the Church, some bishops still moved an abuser to a new church and didn’t tell the police, or the parents of his future victims. I’d say out loud, “What the hell is the matter with these people?” I could still be shocked at the contempt with which some Catholics treated their own tradition and at the eagerness some on the other side leapt to insult the pope. Reference to the wheat and tares did not comfort me much.

Except that I am a field with wheat and tares. My own life is a microcosm of the Church’s. Confession taught me this. I had been received into the Church, and there I was every few weeks kneeling in the confessional taking up God’s promise to make things right between us, because I had messed up the friendship. I am a mess and still God is working in me his purposes to accomplish. That’s the way the Church is.

Whenever I found something wrong — whenever the Tabernacle was hidden — I still found much good I could find nowhere else: the Mass above all, but also the Mass celebrated with good people who loved God and others; the “welcome home” of confession; the friendship of Our Lady and the saints; teaching that the world thought stupid that brought true happiness; a vast collection of deep and serious thinking about all the crucial matters; the examples of living saints and would-be saints; priests I liked and priests I loved; even a high and true humanism the world could not provide. In the Church, I could live in hope. I could always find the Tabernacle if I looked.

Looking for the Tabernacle

Some years ago, travelling in another state, my son and I found ourselves in a new church. The Tabernacle was nowhere to be seen. I spent a good portion of the Mass looking for it, because I knew it had to be there somewhere and I couldn’t rest till I found it. It was a puzzle that became more puzzling as Mass went on. The church had no tabernacle that I could see.

We only found it after Mass as we were leaving the church. We found it outside the doors of the sanctuary down to the right at the end of the vestibule, in a tiny room just big enough for a small Tabernacle, a chair without a kneeler, and a table with copies of the National Catholic Reporter. The room seemed to have been a closet before being turned into a chapel, one as far away from the altar as physically possible.

But we found it. It took a little effort, but we found the Tabernacle. Jesus was there. That’s what I would say after 15 years as a Catholic. Jesus is here, friends. He’s always here if you look.