What Star Wars Teaches Us About Divine Mercy 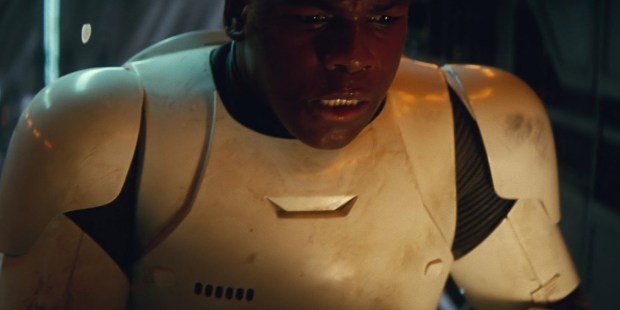 A stormtrooper shows us the heroic response to evil

“Where sin abounds grace abounds all the more” (Romans 5:20). Throughout history our greatest saints and heroes have come through for us during the darkest times. Just when we think that all is lost and darkness has conquered, men and women rise up to the occasion to defeat the power of evil.

What is even more interesting is how evil tends to be defeated by these heroes not by sheer energy or force of will but by counteracting the darkness with light: practicing mercy in place of cruelty.

Such is the case in Star Wars: The Force Awakens, and can be seen most dramatically in the character of stormtrooper turned Resistance fighter, Finn.

In the first few minutes of the film we are shown the great evil of the First Order and witness the slaughter of a small village under the guidance of villain Kylo Ren. He instructs his stormtroopers to round up all the villagers (many of whom are without weapons) and orders their destruction.

In the midst of the invasion, we meet a stormtrooper who is unsettled by the scene before his eyes and he simply cannot follow orders to pull the trigger. While these mindless soldiers are trained from birth to be killing machines, stormtrooper FN-2187 does not want to join the carnage. He sees the horror of the scene and something within him resists. The blood of the innocents changes him forever.

Later on he returns to his ship, knowing that he must leave. In the face of great darkness, he chooses to turn away and start following the light. As a first act of goodness, he intercepts the captured Resistance pilot Poe Dameron, frees him from further torture and execution and escapes the clutches of the First Order.

During this intense flight from the forces of evil, stormtrooper FN-2187 receives a name, something he had never had. Throughout his whole life he was nothing more than another “number,” a cog in the wheel of the First Order. Poe names him Finn, and by doing so gives him a new identity, and with it a sense of selfhood. Finn can now break from his past and start a new life.

He continues his new mission by seeking opportunities to save and restore, instead of destroy. Finn comes across a woman in distress (Rey) and runs to her aid. However, Rey ends up saving his life more than he is able to save hers. Nevertheless, Finn has begun to choose the practice of mercy instead of cruelty.

The character of Finn gives us a great example of a heroic (and appropriate) response to darkness. In the face of great evil, we are sometimes tempted to round up all the difficult people in the world and execute them in the same way that the stormtroopers killed the innocent villagers. We think fighting fire with fire is the only way to defeat them. However, that is not the way of God.

When God became man and walked this earth, he did not smite those who sought to kill him or strike dead the Roman soldiers who nailed him to the cross. Instead, Jesus said, “Father, forgive them, for they know not what they do” (Luke 23:24). Pope Francis highlighted this reality in his most recent Urbi et Orbi message when he said, “With the weapons of love, God has defeated selfishness and death. His son Jesus is the door of mercy wide open to all.”

Mercy is the hallmark of a Christian life and is what the world needs right now. It is no coincidence that this year, a year marked by such division, hatred and persecution, is also the Jubilee Year of Mercy. Perhaps God is trying to show us that in the face of such evil in the world, the only response that will turn the tide — and let God’s light shine in the darkness — is the Christian’s sense of himself or herself as a vehicle for that light, a human being peculiarly charged by Christ to bring forth mercy.

Philip Kosloski is a writer and blogger. His blog can be found at philipkosloski.com.