Prudery Killed “Of Kings and Prophets” 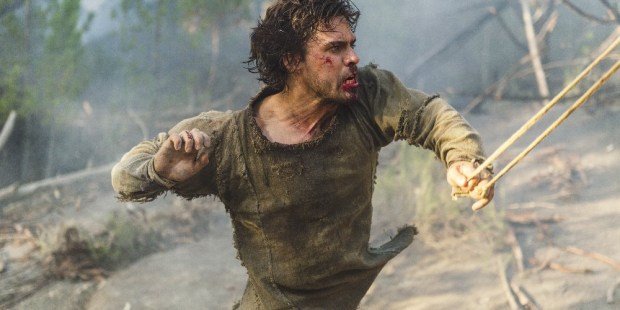 Viewers who plopped on their couches to watch David trounce the Philistine giant in episode 3 of ABC’s Of Kings and Prophets were in for a big surprise: there was no episode 3 to be found.

The show was cancelled.

Things never looked good for the biblical epic, which brought the Old Testament stories of 1 and 2 Samuel to the small screen. The show was originally slated for a prime time slot on Sunday night but was bumped after producers had to scramble to recast and reshoot. Its new slot on Tuesday nights has been an unlucky one for ABC, hosting four consecutive flops that were also cancelled during or just after their first season.

But more than its time slot, the series had a bigger hurdle to leap. Marketed as a midway point between HBO’s Game of Thrones and Roma Downey’s The Bible — a “violent [and] sex-drenched” story with biblical roots — Of Kings and Prophets was designed to be the perfect catch-all, appealing to both non-religious and religious viewers for different reasons. “We knew it could appeal to a faith-based audience because it is a loyal retelling of the biblical story,” executive producer Reza Aslan explained, “but it also appeals to secular audiences because that biblical story is crazy … so we thought, we’ve got a story that will finally unite these communities.”

Of Kings and Prophets did anything but. Aslan — who, through his book Zealot, is no stranger to controversy — knew that the show would challenge the status quo of faith-based entertainment and mounted an early defense: “We got no after no after no, primarily because Hollywood executives would say there is no way we can put this story on the screen because all the sex and violence will offend the faith-based viewers. We had to remind them that all the sex and violence they objected to were literally taken from the Bible.”

But that wasn’t enough for Tim Winter, the president of the Parents Television Council (PTC), who blasted the pilot after a screening: “The real question here is, why wouldn’t ABC and the show’s producers want to reach the largest audience possible by making a series based on the Bible able to be viewed by families? It appears that their primary objective was to be edgy and explicit, rather than to entertain with a biblical story.”

Winter’s organization then reportedly held “private conversations” with some of the nation’s top TV advertisers to warn them about the show’s graphic content, a move that PTC credits with ushering in its cancellation. “We’re very delighted in that decision made by ABC,” Winter declared to The Christian Post. “We certainly question why they would ever put it on the air to begin with, but the good news is it has received a death sentence just two weeks in.”

But is it such good news?

This was a huge opportunity: a well-acted, entertaining, and more or less faithful retelling of a seminal story from the Bible. “When one considers the extraordinary number of memorable passages in 2 Samuel,” Bishop Robert Barron writes in an introduction to 2 Samuel, “and when one takes in the literary complexity, theological depth and psychological insight contained in its pages, one can only agree with Robert Alter’s contention that 2 Samuel is one of the most impressive texts to come down to us from the ancient world.” Because of the cancellation of the show — which, in comparison with much of what’s on television, was actually fairly mild — scores of non-religious viewers will miss out on this great story, and what it can teach us about history, biblical kingship, and the connection between David and Christ.

The “official” response from the religious community to “Of Kings and Prophets” was also a big step backward for the recent incursion of faith-based entertainment into the broader culture. The PTC’s goal of promoting family-friendliness on broadcast television is certainly a noble one. But Aslan and Brancato were spot-on: “explicit” content is right there in 1 and 2 Samuel, and in fact much of the Bible. To protest that is to protest too much.

There’s a delicious irony at work here: Winter’s organization, which was founded by a Catholic activist in 1995, has demanded that a Muslim academic declaw and defang the very thing that undergirds its own values; and the stories of Israel and the Incarnation, which reveal the spirit manifesting itself in and through the muck of the world, have been reduced to sanitized vessels for mere “moral guidance” (as one reviewer would have it).

When the faithful treat not only our world, but the word of God, with a kind of moralizing, white-gloved prudishness — adopting what Brandon Ambrosino at Crux terms a “Sunday-school-ification of the Bible” — it should come as no surprise that, in the end, no one is really interested in hearing about it but them.