New Oratorio Honoring St. Rita of Cascia to Premier in May 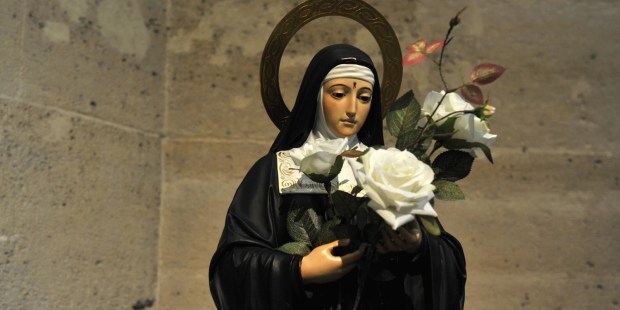 “A Rose In Winter,” composed by Frank La Rocca, will shine light on the inspiring life of the patroness of impossible causes

In July 2013 composer Frank La Rocca received an e-mail from his friend Alfred Calabrese. It was a request for an oratorio — a large musical composition — on the life of St. Rita of Cascia, the patron of a Catholic parish in Dallas where Calabrese is music director. La Rocca knew nothing about the saint. “After accepting the commission … I had to learn something about [her],” he later wrote on his website.

St. Rita, whose feast day is celebrated on May 22, was an Italian Augustine nun now known as a patroness of impossible causes. The marital strife she suffered as a young woman, as well as living in a town with violent political factions, made Rita an ideal patron for wives in difficult marriages and those surrounded by hardship and violence. The death of her husband at the hands of a rival family, followed by the death of her beloved twin sons from plague, grieved Rita, but her private forgiveness and public reconciliation with her husband’s murderers brought an end to the bitter rivalry in her hometown. She was eventually able to fulfill her childhood dream to enter religious life, where her devotion to Jesus Christ and her union with his suffering deepened.

La Rocca believes it’s always a good time to call attention to people like St. Rita — who’ve lived lives of heroic virtue in uncertain, tumultuous times — to teach the power of forgiveness in reconciling long-established tensions in families and communities.

“I wish I could say it was because of the Year of Mercy,” says La Rocca. “But this project was conceived before Pope Francis had announced the Jubilee. Still, it is a happy instance of synchronicity.”

St. Rita’s Catholic Church in Dallas was already known for its excellent music program, directed by Calabrese, before its commission of the oratorio. In the e-mail to La Rocca three years ago, Calabrese said the pastor of the parish, Rev. Msgr. Robert M. Coerver, wanted to make St. Rita even more prominent in their community. A big believer in the the power of the arts to evangelize, Coerver was willing to provide resources to “dream big,” and Calabrese thought a major piece, a cantata oratorio, was in order.

After a long search for someone to write the libretto (the text) for their musical work, titled, “A Rose in Winter,” La Rocca and Calabrese chose a young Catholic writer in San Diego, CA, named Matthew Lickona.

“Working from a somewhat limited set of facts and traditions surrounding her life, Lickona created a remarkably imaginative text — an epic poem, really (since it is metered and rhymed throughout its 25 pages) — that lent itself very well to a dramatic musical setting,” La Rocca told Carl Olson in an interview for Catholic World Report. Here’s a highly condensed synopsis of the text:

Two pilgrims meet at a Holy Week festival in Cascia, Italy, and discover they have something in common: each of their mothers believed the life of her infant son had been saved through intercession of St. Rita of Cascia (1381-1457). The men share little else: one of them, Tomás, has rejected his faith and all the pious stories about St. Rita; the other, Fideo, holds onto his beliefs, though tenuously. A series of flashbacks return us to St. Rita’s hometown during the Italian Renaissance as we see how the challenges and complexities of her life shed light on the conflict that develops between the two men. Her turbulent life unfolds in a series of musical tableaux that impart a dramatic immediacy to all that she experienced as daughter, bride at age 12, mother, widow and Augustinian Nun.

A more detailed synopsis can be found on the Facebook page dedicated to “A Rose in Winter.”

The icon of the Crown of Thorns interwoven with a living branch from a rose bush was commissioned from renowned Catholic artist Daniel Mitsui for the project.

The composition, scheduled to be performed for the first time on Saturday, May 21, 2016 (the day before the saint’s feast), has been written for four soloists — Rita (soprano), Fideo (tenor), Tomas (baritone) and Christ (bass-baritone) — a chorus, a chamber orchestra and an organ. It runs about 90 minutes.

Each movement takes place on a day of Holy Week and follows a pattern: an event associated with that day (such as the crucifixion or the resurrection) is recalled, leading to a dialogue in the present day between the Pilgrims, followed by a flashback to St. Rita’s life.